It's Just Paper is based on an original mixed-media painting which consisted of a digitally designed print and acrylic paint. Time is our most valuable currency. Money is a necessity but how are we choosing to spend our time? This piece is a reminder of how precious that choice is. The three clocks represent New York, London and Tokyo which are home to the largest stock exchanges in the world. The digitally printed background consists of currency from each of those cities. “INVEST WISELY” is repeated backwards throughout the piece with the hidden message “IT’S JUST PAPER.”

A BIG thank you goes to Woodbranch Management, Inc. for allowing us to utilize the windows of their property at 930 Main. 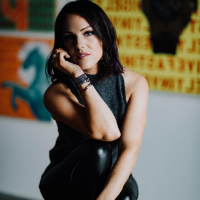 Angela Fabbri is a self-taught artist who is California born, Mississippi raised and Houston-based. She received her first commission at the age of 16, and after graduating from Mississippi State University with a B.A. in Marketing, she moved to Austin, TX. In 2010, Angela moved to Houston to explore the possibility of art as a career. In 2012, Angela was invited to show at the Bayou City Art Festival, and later, the Houston Fine Art Festival and the Austin Fine Art Festival. Angela debuted the first of two abstract series, Color Fusion, with her first solo show in 2014, which was co-hosted by fashion design house Billy Reid. Since then, Angela has painted live at private events for Baccarat, Thrillist, Dos Equis, the Four Seasons and various charity fundraisers, and participated in the 2019 Florence Biennale, Spectrum Miami during Art Basel, Artexpo NY 2020 and the Houston Chronicle's The Gray Couch Project. Her work has also been selected by curators for the MOCA, Los Angeles and the Whitney in New York.