Somos Libres features a background that includes images of the horned snakes which are associated with Northern American Indigenous peoples. The black stencil overlay represents an update into modern times for the historical mythical figure.

A BIG thank you goes to Midway for allowing us to utilize the windows of their property at 803 Fannin [803 Fannin Garage]. 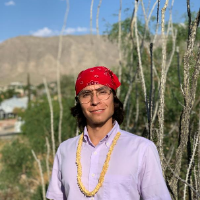 Ulys Gold was born and from the El Paso area and now calls Austin, Texas home. His work revolves around creating a conversation between the work and the viewer and he credits the large variety of landscapes and culture in Texas as inspiration for his pieces which include murals, sculptures and performance art.

Skyline District
Back ToTop
My Favorites0