Make Art Great Again is a mix of references paying homage and making fun of the constant use of icons as labels in both the making and purchase of art. The mural pokes fun at the Artworld and Art Circus (which the artist is a part of). Make Art Great Again includes references to Banksy [the rat with "you lie"], Basquiat [the crown], Keith Haring [dog collar], Andy Warhol [Marilyn Monroe, Walt Disney [Mickey Mouse ears], Leonardo da Vinci [Mona Lisa pose] and Damien Hirst [large dots].

A BIG thank you goes out to One Market Square Garage for allowing us to utilize the windows of their property at 800 Preston! 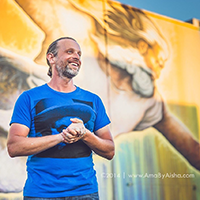 Sebastien "Mr. D" Boileau is a Versailles, France-born artist whose signature style is known as “Canpressionism“ — a neo-impressionist style primarily done with spray paint and street art techniques. Influenced by the American Pop Art and Graffiti movement of the 60s, 70s, and 80s, Mr. D began his artistic endeavors in Paris in 1987 [at the age of 14], and created his first piece of canvas art, as well as his first large scale mural, in 1989. He migrated to the United States in 1998 and in 2000 launched what is now a highly successful mural company in Houston, Texas, Eyeful Art Murals and Designs, serving both the public and private sectors. Mr. D’s recent accomplishments include having Produced the award-winning “Preservons la Creation”, “AmeriCANS” solo show in Wynwood Art District during Art Basel 2014 and conducting a live painting for “Nuit Blanche” event in Paris.