Anyone looking for further evidence of Downtown Houston’s lifestyle evolution need look no further than Exhibit A. As in Allen Center. The iconic complex that towers over Smith and Dallas streets on the western edge of Downtown has been home to three office buildings for nearly half a century on a city block designated for working and named for the New York real estate speculators who rolled the dice on a seemingly uninhabitable swath of land 50 miles inland from the Gulf of Mexico. That was before Brookfield Properties began transforming the campus into a vibrant mixeduse destination made for eating, drinking, sleeping and all around merry-making—further solidifying Downtown’s growing reputation as one of the most sought-after neighborhoods in the city.

As it happens, women loom large in the multiphase transformation of the newly modernized Allen Center, starting with C. Baldwin—a hyper-localized luxury hotel brand located in the former Doubletree Houston Downtown inspired by Charlotte Baldwin Allen, the unsung Houston hero who used her inheritance to finance pretty much everything needed to start a city from scratch in a mosquito-infested swampland. Considered by some to be the city’s third founder, Charlotte Allen has long been overshadowed by her more buzzed-about husband—math-teacher-turned city co-founder August Chapman (A.C.) Allen and his 26-year old younger brother, hat salesman John Kirby Allen. Together with A.C.’s wife Charlotte, the Allen Brothers boldly traversed the banks of Buffalo Bayou by steamer boat and onto their eponymous landing with promises of rolling hills, flowing rivers, oceanfront views, and 1836 style American dreams. Dubious marketing tactics aside, John Kirby’s premature demise of bilious fever and A.C.’s early exit on a one-way ticket to Mexico would make the quietly resolute Charlotte suddenly rich, secretly single and the primary financial driver of the lawless muddy town’s entire construction industry. Though she couldn’t own land at the time as a woman, it was Charlotte who bankrolled the city’s navy before building the short-lived Capitol of the Republic of Texas. When the state capital moved to Austin in 1939, Charlotte breezily repurposed the Capitol of the Republic into the Capitol Hotel, later selling it for a handsome profit to Rice Institute founder William Marshall Rice, who added a five-story annex and rebranded into—you guessed it!— the Rice Hotel. Had she accepted her friend Sam Houston’s suggestion to decree Houston Charlottesville rather than suggesting a more famous name that would better serve the greater good, Charlotte Allen’s brand awareness might have taken a much different trajectory. Until now. 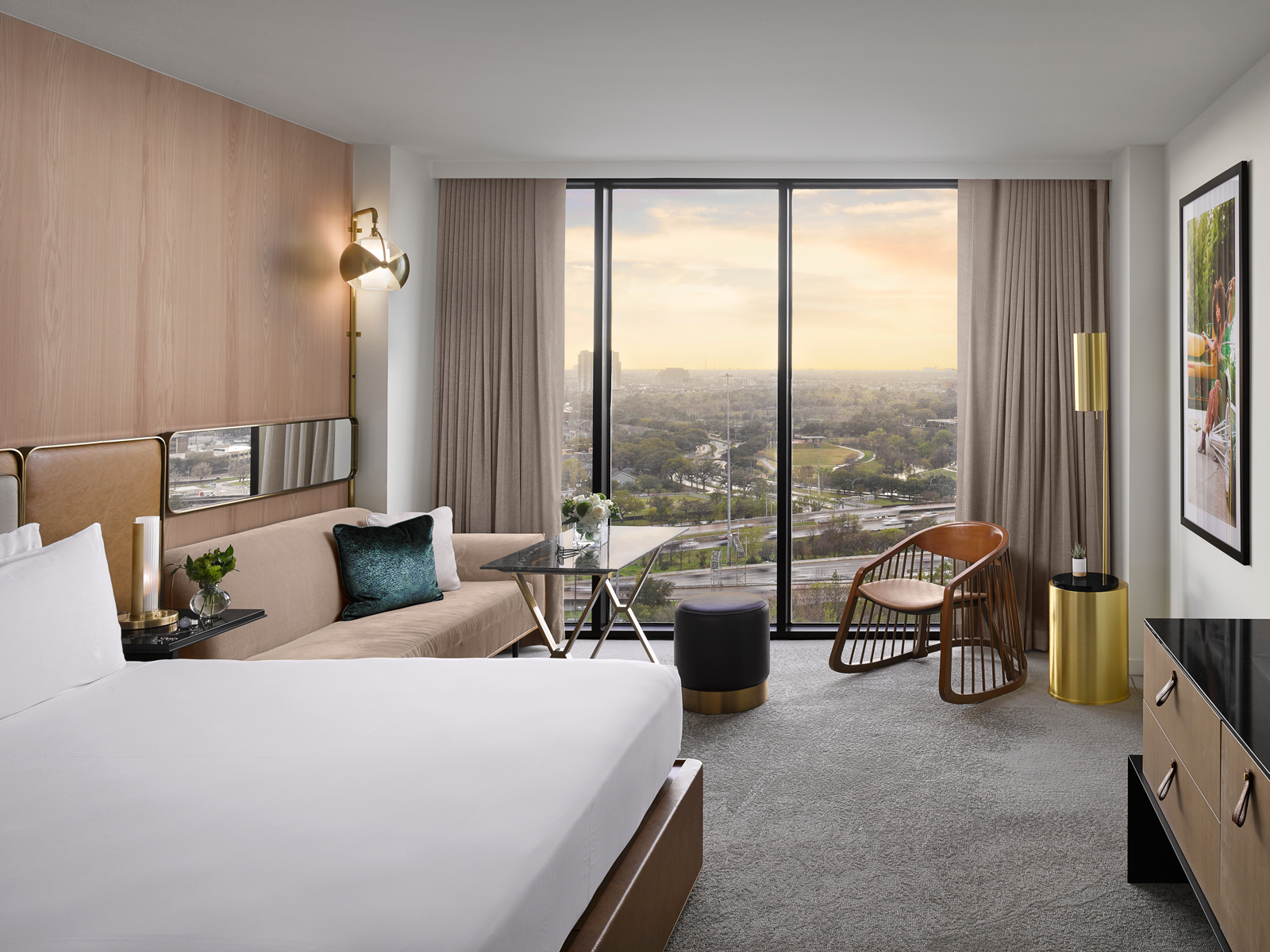 CHARLOTTE
Enter C. Baldwin—a new hospitality concept that pays homage to the kick-ass woman former Houston First Lady Andrea White says Charlotte actually was. The 354-room contemporary show palace includes 14,000 square feet of meeting space surrounded by abundant green space and a celebrity chefdriven restaurant plus lobby bar—all of which launched in a manner befitting its namesake with an invitation-only bash in October that attracted more than 2,000 movers and shakers representing the who’s who of Houston and firmly positioning the property as the undisputed social anchor of the reimagined Allen Center in the process. “C. Baldwin represents the best of what Downtown Houston has become while recognizing the women intertwined in its history,” said Maggie Rosa, general manager, C. Baldwin. “A concerted effort was made not only to involve female decision makers in the hotel’s development, but to also create spaces that would appeal to the female traveler while naturally intriguing their male counterparts.” Like its namesake, C. Baldwin is a monument to strong female visionaries brought to life by internationally renowned Lauren Rottet of Rottet Studio in addition to award-winning ROHE Creative’s Kate Rohrer, who created a vibrant aesthetic for the hotel’s 145-seat restaurant, Rosalie Italian Soul. 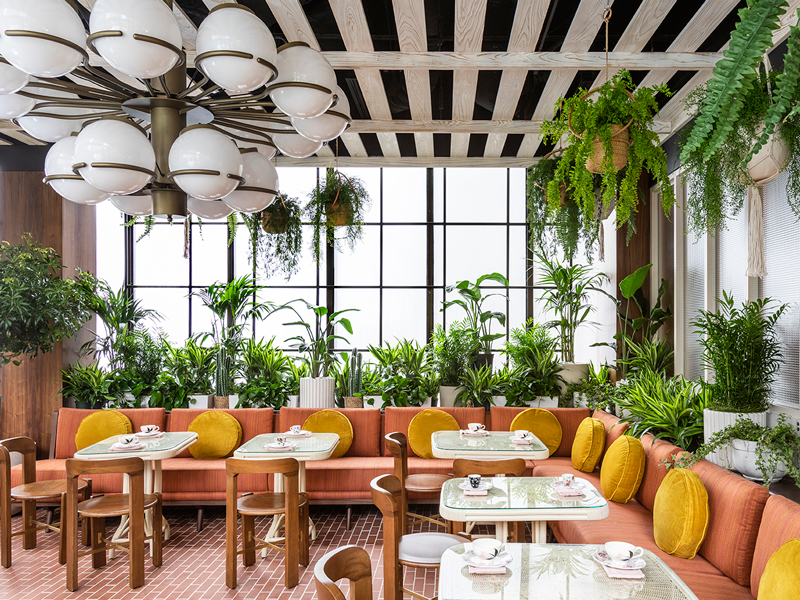 ROSALIE
The brainchild of Top Chef Masters winner Chris Cosentino and business partner Oliver Wharton, Rosalie is named for the chef’s great-grandmother Rosalie Cosentino, a firstgeneration Italian immigrant who inspired his career in cooking. Think classic red-sauce dishes, pizzas, house-made foccacia, freshmade pastas and family-style plates like bistecca Fiorentina and whole chicken Milanese. “This menu represents immigrant cuisine in America,” said Cosentino. “When Italians immigrated to the U.S., it was difficult to acquire the same product that they had at home in Italy, which is why Italian American food was created. Ingenuity happened. I’m taking a lot of the dishes that I grew up with and breathing in a little bit of new life for this little region of Italy known as Houston.”

To that end, Cosentino collaborated with Philadelphia-based Rohrer on an Italian midcentury design to create a dining experience that weaved together Rosalie Cosentino’s 1970s-era kitchen with the comforts of home by using contrasting materials, geometric forms and timeless accessories to showcase an eclectic but elevated concept. Hollywood style booths overlook the room from a raised platform in the main dining room while the custom walnut shelving displays retro TVs, vinyl records, receivers, boom boxes and art that speak to Cosentino’s childhood. Banquettes featuring denim-inspired upholstery and 10 hand-embroidered rose and floral patches by Canadian artist Sam Eldridge round out the room. 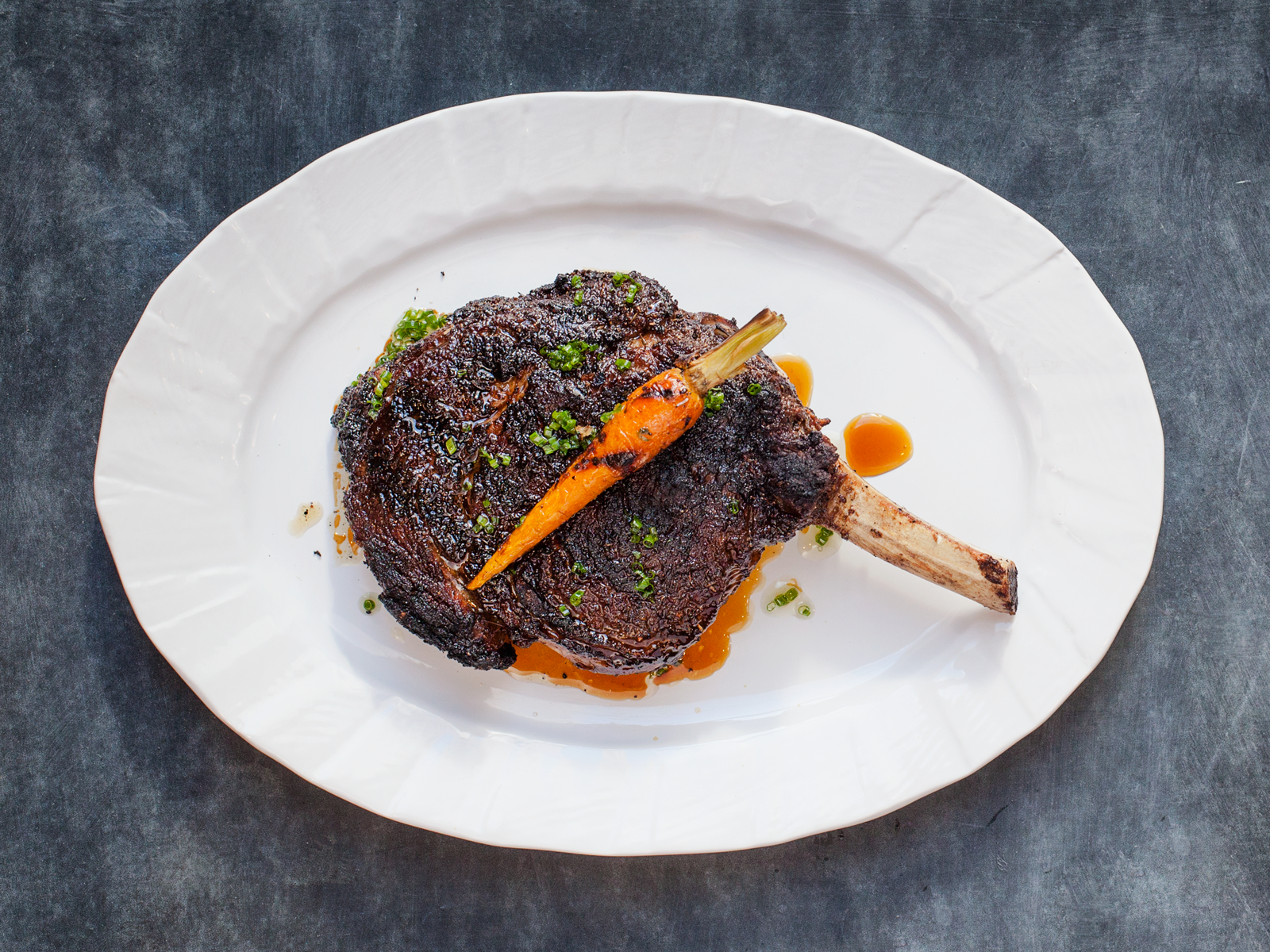 GRACE
Cosentino isn’t the only celebrity chef tapped for the reimagined lifestyle destination. Denverbased Troy Guard of TAG Restaurant Group has just opened his modern American steakhouse Guard and Grace in the glass box at One Allen Center. The Hawaii native first earned his culinary stripes under the tutelage of longtime mentor, the legendary chef Roy Yamaguchi, before putting down roots in Denver where he launched his first restaurant—TAG—in 2009. The prolific chef/restaurateur now owns and operates nine brands in 11 locations under the TAG umbrella, including TAG Burger Bar, Los Chingones, FNG, Mister Tuna and HashTAG, but he chose Guard and Grace for his first venture outside the Mile High City—no doubt a result of Houston’s insatiable appetite for all things steak.  “Everyone I’ve met in Houston has been so welcoming and hospitable, and I love the diversity more than anything. It’s a melting pot of cultures from so many different countries, and I love exploring different neighborhoods trying authentic Thai, Ethiopian, Cajun, and on and on like that,” said Guard.

Named after Guard’s daughter Grace, Guard and Grace at One Allen Center is double the size of the original Denver location, making its Houston outpost Guard’s most ambitious restaurant to date.  Ensconced in a 15,000-square-foot glass box, the totality of the space includes a 350-seat-square-foot main dining room, three kitchens, four bars, a 100seat patio that will open in 2020, a mezzanine level with multiple state-of-the-art private dining rooms, a temperature-controlled wine tower complete with lockers for guests to stash their private reserve bottles and unobstructed views of the building’s newly landscaped oneacre green space aptly named The Acre. The oak firewood-cooked steaks have given Guard and Grace a reputation as one of the top steakhouses in the country and made Troy Guard a household name in Denver along the way. The menu—which will change seasonally— features everything from prime certified Angus and local grass-fed cuts of beef, dry-aged ribeye, hangar steak to fresh local seafood, house made pastas, charcuterie, artisanal cheeses and vegetarian dishes like oak-fired carrots with herb yogurt, set in a stunning contemporary interior awash in natural light from the restaurant’s 40-foot tall floor-to-ceiling windows.