Small businesses are the heart & soul of #DowntownHouston. Click here for more information on how to support them as well as a list of resources available for small businesses, startups, arts groups, hospitality and non-profit organizations. #houstonstrong
Print
Share
0
Astros Postseason Fever
Photo: Houston Astros

The Astros 2019 Postseason has arrived and if you’re half as excited as we are, you’ve either secured your tickets to the nearly SOLD OUT home games or you’re already making plans to watch it with your fellow die-hard fans. So tell your boss you’re leaving work early [or make it an “off-site team meeting”] and head Downtown to watch the 2017 champs continue their pursuit of taking back the World Series title! 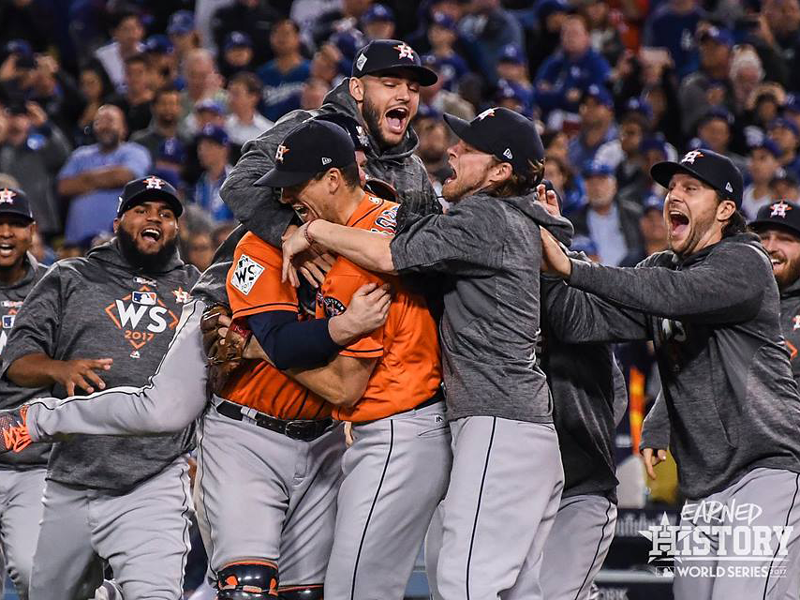 For all the latest in official MLB gear, head to the Astros’ own Team Store in Union Station at the corner of Texas and Crawford. There, you’ll find everything you need to cheer the Astros on to victory including giant foam fingers, koozies, t-shirts and World Series Champion gold edition jerseys and hats!

Look no further than Funatics for all your Astros – and H-Town sports – gear. Located in The Shops at Houston Center, this fun store has everything you need to support your baseball boys. From jerseys and t-shirts to hats and jackets, this sports spot is a handy little hidden gem to help you rep the ‘Stros in style. 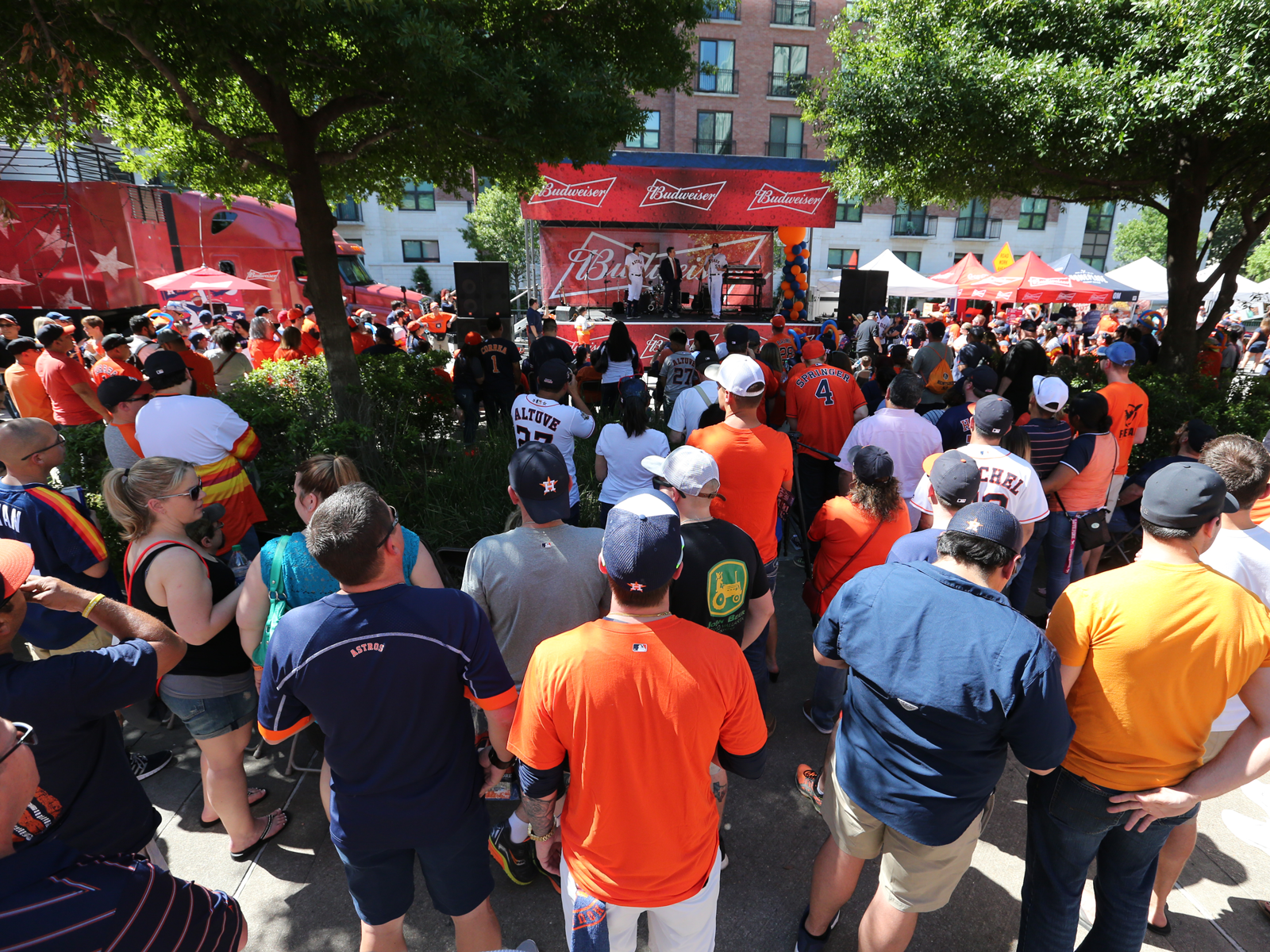 Step-up your game at Osso & Kristalla, the stylish Italian restaurant located inside the 500 Crawford residential complex. While it may not be your typical pre-game locale, $5 Astros game day specials select beers and an array of scrumptious game day foods make this a chill hangout before a postseason game. It also doesn’t hurt that it’s just steps from the park’s Union Station entrance!

Downtown’s original food hall is a great place to gear-up for a game! Presenting a variety of fare options like barbeque, pizza, Nashville hot chicken and more, Conservatory also features a beer garden with 60 local and import beers on tap. Game days at this funky underground spot also come with drink specials and surprise food pop-ups!

Conveniently located across from Minute Maid Park with 3 bars, tons of TVs, ample standing room and a bangin’ sound system – HTX Fan Tavern is the perfect place to amped before the game! Hang out with friends over a beer then head across the street to witness our team #TakeItBack!

With five curated, chef-driven restaurants and three unique bars, Bravery Chef Hall offers a little something for everyone with a line-up of concepts featuring pasta, sushi, barbeque, Vietnamese cuisine and more. Sip on a few creatively concocted cocktails at the Secret Garden, grab a glass of one of the 30 exclusive wines on tap at Bravery Wine Bar or indulge in a hand-selected spirit at Lockwood STN.

If you’re one of the lucky fans to have scored a ticket to a home postseason game, stop by the official Astros Street Festivals from 3 pm-5:30 pm with live music, lawn games, inflatables and face painting for the little ones, local food truck fare and more! You’ll even have a chance to get a selfie with Orbit and the Shooting Stars. Note: Must have game day ticket to enter the festival. 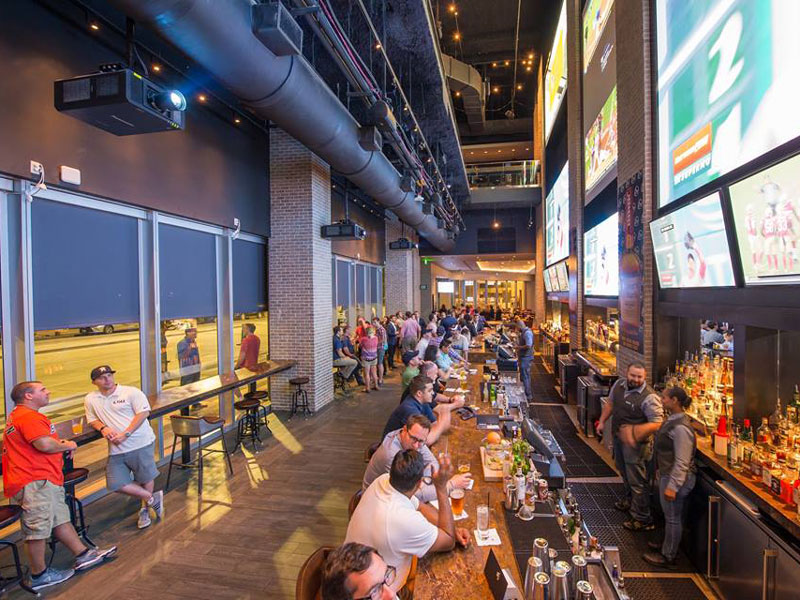 Just because the ‘Stros are on the road doesn’t mean you can’t still watch the game from home field! Cheer them on with fellow fans from Minute Maid Park at the official Postseason Watch Parties as each game is shown on the videoboard in the stadium AND out on the Plaza on Crawford. Expect live music, food trucks, bar games, caricature artists – oh, and everyone’s favorite alien, Orbit, will be there too! NOTE: Gates open 2 hours prior to First Pitch; Must claim a FREE admissions voucher in order to attend the event.

Named after Astros legend and Hall-of-Famer, Craig Biggio, Biggio's is located inside the Marriot Marquis and boasts two 30-foot tall hi-def screens, leather recliners and elevated game day grub like pretzels, nachos, hot dogs and more. With local brews, craft cocktails and the occasional guest appearance, this is hands down the next best place to watch the game outside of Minute Maid Park!

Cheers a few game day beers at Bovine & Barley. With oversized “HTX” illuminated letters hanging on an exposed brick wall, this urban bar and eatery oozes with hometown pride. Hit them up for a happy hour pre-game sesh or stay a while and catch the game during one of their postseason watch parties, either way it’s sure to be a good time.

Get the best of both worlds at MKT Bar – watch the game live on their 120” projection screen and chow down on some delicious game day eats! Game day specials include $4 Karbach Brewing Co. Crawford Bocks and Crush City Beef Hot Dog with Homemade Potato Salad for $10. If those options aren’t your thing, this hip wine and beer bar has plenty of tasty dishes and treats to keep you cheering through the game! 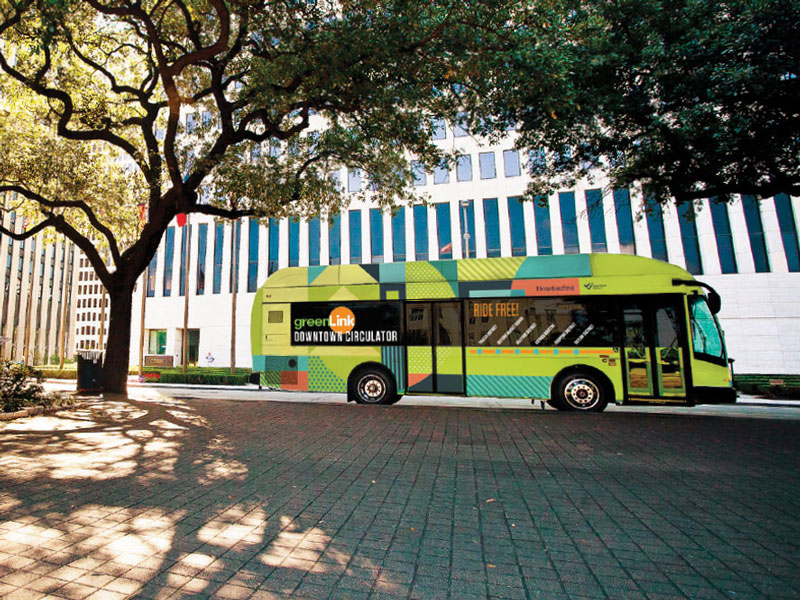 Transportation to and from Minute Maid Park or other game day hot spots in Downtown Houston is easy with FREE rides on Downtown’s Circulator, Greenlink. The Orange Route which runs Monday-Friday from 6:30 pm-midnight, Saturday from 9 am-midnight, and Sunday from 9 am-6 pm, has a stop conveniently located across from Minute Maid Park near Crawford and Texas and picks up riders every 10 minutes.

Ditch your car and join other fans traveling to the game from the East End or Southeast Houston on METRORail’s Green and Purple lines, both conveniently located just 1 block away.