A revival is underway in downtown Houston and Block 334 is at the heart of the transformation.

Centrally located at 1515 Main Street, Block 334 shines a light on Downtown’s past while embracing the neighborhood’s future.

At its roots, the luxury Downtown Houston apartments are about community. With a social lounge, club room and outdoor lounge, Block 334 brings residents together while providing easy access to some of the best amenities in this urban neighborhood, many of which are just outside their door. Block 334 offers residents one of the highest walkability scores in the city thanks to its close proximity to restaurants and bars, entertainment and sports venues and the offices of many prominent companies.

In the social lounge, guests and residents alike can journey through time thanks to a colorful, historic display of the neighborhood. See how “The Block” started, the VIPs who once lived here, and artifacts discovered during Block 334’s excavation process, including historical postcards and photos, building materials, horseshoes, glassware and more. The social lounge uses pieces of Block 334’s notable history to spark conversation.

Some of the items on display include an iconic and rare 1940 Chevrolet special deluxe “Flying Lady” hood ornament, an 1877 glass snap cap for canning, and a clay-fired Butler brick made in Elgin, Texas at Butler Brick Co. The Butler bricks were used in the Texas State Capitol, as well as several brick buildings at the University of Texas. 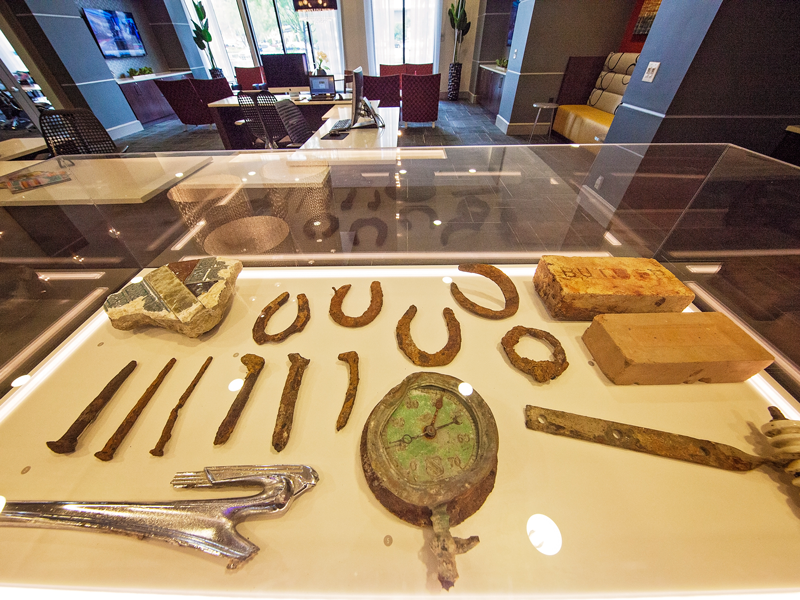 Another object found during the excavation, and a significant piece of the neighborhood’s storied past, is a large brick beam that supported the arched windows at Central Christian Church. The church, with its Greek classical architecture, was a cornerstone of the community. It was built for just $65,000 in the early 1900s. In its day, the church had a slew of famous visitors including James A. Garfield, Lyndon B. Johnson, Ronald Reagan, Janis Joplin and actress Frances McDormand. Today it is Bethany Christian Church, located at 3223 Westheimer Road.

As Houston began to grow outward from Main and Commerce, large and prosperous neighborhoods developed to the south, filled with upscale Victorian houses for the city’s most elite residents. Some of the area’s VIPs are highlighted in Block 334’s social lounge.

Perhaps the most notable resident within the neighborhood was Frank Andrews, the founder of law firm Andrews Kurth. Andrews also served as Texas’ assistant attorney general, playing a pivotal role in developing the Houston Ship Channel.

Edward Peden, who lived on Bell Avenue, served as director of the Federal Reserve Bank as well as federal food administrator for Texas during World War I. Peden also served as president of the Houston Chamber of Commerce. In 1924, the Houston Rotary Club awarded him a medal for distinguished service to the community.

Another local, Henry H. Dickson, served as a charter member on the Houston Museum and Scientific Society, which is now the Houston Museum of Natural Science. He also founded Dickson Car Wheel Works, which today is one of the largest and most profitable establishments in the South.

The most well-known resident on the block in the early 1900s was Capt. James A Baker. Capt. Baker lived in what is now known as the Baker House on Main Street while he was CEO of Baker Botts, the international law firm that got its start and is still headquartered in Houston. He also served as the founding chairman of the Rice University Board of Trustees. Today, Baker Botts and Rice University play an integral role in Houston’s business scene, contributing immensely to the area’s economic growth by investing in the community and its inhabitants.

Block 334 is proud of the historical past of their neighborhood and is excited to establish its own roots.

Available in one- and two-bedroom apartments, Block 334 offers residents an urban lifestyle blended with quality and amenities. Features include soaring 10-foot ceilings, custom hardwoods, designer carpeting in bedroom suites, a spacious en-suite master bath and walk-in closets. To bring out the inner chef in its residents, the kitchens have stainless steel appliances, inviting residents to put their culinary skills to work with a food prep island and built-in beverage cooler. Every unit at Block 334 offers residents gorgeous views of the city and select apartments even come with private balconies or patios.

Outside of their individual homes, Block 334 residents have a 24/7 athletic center with a superior cardio theater, numerous lounge spaces for business or social gatherings and a game room.