Small businesses are the heart & soul of #DowntownHouston. Click here for more information on how to support them as well as a list of resources available for small businesses, startups, arts groups, hospitality and non-profit organizations. #houstonstrong
Print
Share
0
Backstage
Creative Collaborations: a celebration of history and vision for the future
Photo: Lawrence Knox

As Theatre Under The Stars celebrates its 50th anniversary, Artistic Director Dan Knechtges is planning one of the most ambitious productions in the company’s history: a full-scale collaboration with Houston Ballet. Rather than hiring one set of performers to sing, dance and act, as with most musicals, this collaboration brings together Broadway singers with professional ballet dancers, actors and a mix of local talent – building up to one of the most exciting performances Houston has ever seen.

Oklahoma!, coincidentally celebrating its 75th anniversary this year, is a staple in American musical theater history—not only for its captivating music and compelling story but because the enduring messages of love, justice and opportunity continue to resonate with new audiences. The Rogers and Hammerstein classic originally premiered in 1943, during the middle of a war that showed no sign of ending. It introduced characters who put their differences aside in service of a better future, a message that was particularly inspiring to audiences in the 1940s and is just as relevant now in 2018.

The optimistic and collaborative themes within the story are echoed on stage. Knechtges explains the effort to present a very diverse cast, both culturally and ethnically and in terms of artistic backgrounds. He describes the goal “to reflect not only Houston and where we are, but actually the way Oklahoma was in 1904 right before it become a state.” Kevin Moriarty, artistic director at Dallas Theater Center and guest director of Oklahoma! echoes these sentiments, adding that “art belongs to absolutely everybody,” and it is “the obligation of people making and producing art to throw the doors open as widely as possible,” to those from all backgrounds.

Dan Knechtges arrived to his new job at TUTS in the days immediately after Hurricane Harvey. Though he faced plenty of unexpected challenges, the circumstances offered him a unique platform to begin talks for a collaborative performance with the renowned Houston Ballet.

One of his first assignments at TUTS was planning the Hurricane Harvey Relief Benefit at Miller Outdoor Theatre—a moving tribute to the city’s resilience and also the first time all seven Theater District companies performed on the same stage. During meetings to coordinate the benefit, Knechtges met Houston Ballet Artistic Director Stanton Welch.

“I had been a fan of Stanton’s work and seen it many times,” explains Knechtges. “I introduced myself and casually suggested getting lunch. A month later we were already talking about doing a show.” The one that made the most sense to all parties? Oklahoma!, a classic that revolutionized the genre when it premiered in 1943. While most musicals involve dancing, Oklahoma! includes three ballet sequences. It was the perfect opportunity for each organization to showcase the best they have to offer and present something new to their Houston audience.

It meant a lot more work, additional costs, and a dose of uncertainty, but TUTS and Houston Ballet were both excited by the possibilities the production presented. While he’s never choreographed for a musical before, Welch says it’s something he has always wanted to do. “I’ve certainly done ballets based on storytelling, but this is my first time with words and songs and dance,” he explains.

Not only is this a new experience for Welch as a choreographer, but also for his corps of ballet dancers. The opportunity to work with Broadway singers and actors, he says, is something he would have jumped at when he was a young artist: “The dancers in rehearsals are beside actors and singers all the top of their fields, working together,” he says. “I think that inspirational.”

Collaborating gives each organization a chance to elevate their art forms to a scale few audience members may have seen before. Though it makes sense for these companies to work side by side—it’s a musical that calls for ballet, after all—there’s a reason these collaborations aren’t more common: they’re very difficult to pull off.

“It’s a heck of a lot cheaper to hire 20 actors and have them do everything, rather than hiring 20 actors, then 21 ballet dancers, and then a chorus of professionally trained singers,” explains Kevin Moriarty. But to see the very best singing, acting, and dancing, it makes sense to go to the top artists in each of those disciplines. “No one is really expert in all three of those art forms,” explains Moriarty. “So instead of getting a watered-down version of all those art forms,” he says “we’re trying to get the very best of each.”

Beyond the added expenses, coordinating schedules between such a large cast can become a headache as well. “It requires a lot of work,” says Knechtges. “You’re trying to constantly work out schedules and see where each institution bends to accommodate the other.” But everyone involved agrees that the extra hurdles are more than worth it. “In that hard work I think you find that art is a thing that meaningfully impacts the community,” Knechtges says.

The end result is a performance with multiple artistic elements that fuse together in one creative expression. The audience will hopefully not even notice the moment of change, when a chorus takes over to transition into song, or steps aside so dancers can enact the expression on stage. 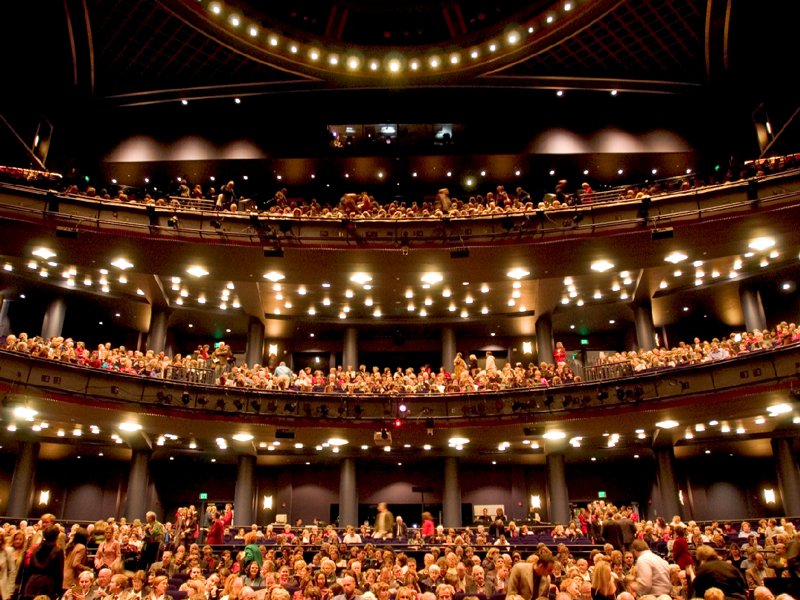 Theater companies across America, and probably every high school in the country, have staged this play, but not quite like this. Most productions feature one cast that does everything. But Houston Ballet and TUTS are working together to show Houston audiences Oklahoma! the way Rogers and Hammerstein originally conceived it.

Rogers and Hammerstein are to musical theater what Shakespeare is to literature. They practically defined the contemporary musical theater, creating the classics South Pacific, The King And I, Cinderella and The Sound Of Music. When Oklahoma!, the first of the duo’s collaborations, premiered in the 1940s it revolutionized the genre. Part spoken word play and part ballet, topped off with show-stopping song numbers—no one had ever seen anything quite like it. It was to audiences then what Hamilton is now.

The process of putting together this production has looked different to everyone involved. Moriarty is used to directing dramatic plays, with no music, while Welch primarily creates ballets that don’t involve singing or speaking. Everyone is stepping out of their comfort zones to work on something unfamiliar, but there is one element that binds it all together: storytelling.

Over and over they return to the story, dissecting what’s at the core of play, what drives the characters to act and what is unspoken, from the terrifying vulnerability of falling in love to the uncertainty of forming a new nation. “All of us on the creative team spend a lot of time talking through the story and its themes, and then we determine how we can each draw on our own individual area of artistic expertise to collaboratively create the most dynamic, compelling and truthful expression of those experiences. We want to honor the material and present it in a way that is surprising and compelling for an audience, as if they’re seeing a brand new musical for the first time,” says Moriarty.

When approached from this lens, the process is familiar for those involved. Though Welch has never choreographed for a musical before, it is similar to how he produces his story ballets. “First we start without steps and we just act it,” he explains, making sure every movement conveys the characters experience and what motivates them to make certain choices. Gradually he adds in the choreography, using movement to propel the story forward and demonstrate the characters innermost hopes and fears.

A Musical For Everyone

Oklahoma! is continually revived across the country. TUTS has staged multiple productions in its 50-year history. “Rogers and Hammerstein portrayed a vision for the nation where people who are different, men and women, old and young, cowboys and farmers, could come together in harmony and with optimism and openness,” Moriarty explains. That timeless message is one explanation for why the play continues to be so successful since its premiere 75 years ago.

Welch agrees: “No matter how divided people may be, we have to come together for the common good. That’s what the characters did. They made Oklahoma. They built a country.” He feels confident that Oklahoma! will be just as popular in another 75 years as it is today.

Oklahoma! opens September 11 at Hobby Center for the Performing Arts. After all the work, planning, rehearsals, and coordination—will TUTS and Houston Ballet want to plan more collaborations in the future? Knechtges is encouraged by the enthusiasm surrounding the partnership. “The community is very much behind this mission,” he says. “They want us to be collaborating with other arts organizations.”

Welch is also optimistic. “I would like to think that this is not a one-off. That this is something that occurs every so many years.”