Small businesses are the heart & soul of #DowntownHouston. Click here for more information on how to support them as well as a list of resources available for small businesses, startups, arts groups, hospitality and non-profit organizations. #houstonstrong
Print
Share
0
In the Footsteps of the Past: Civic Center, Theater & Skyline Districts
History is All Around Downtown – All You Have to do is Look 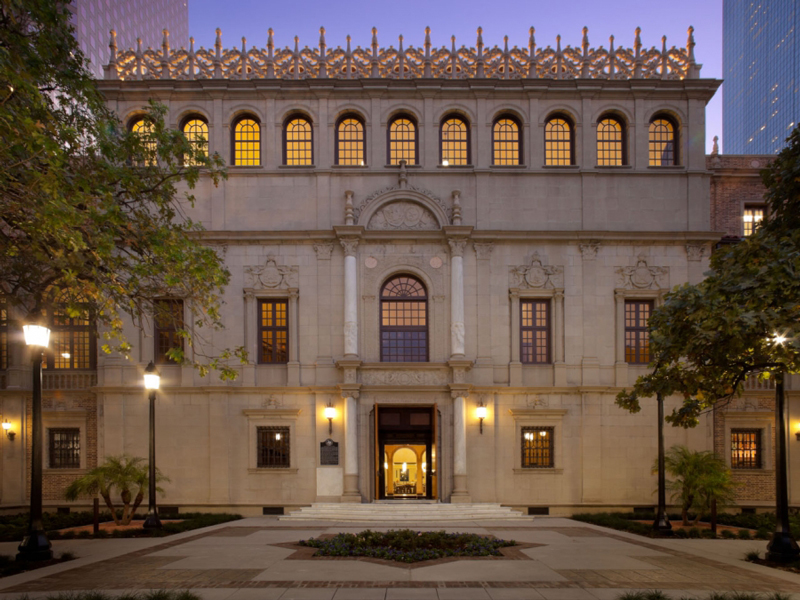 Past/Present: Julia Ideson Building
550 McKinney St.
Julia Bedford Ideson was Houston’s first librarian, hired in 1903. Under her watchful eye, the library’s collection expanded, and its services increased. The building that now bears her name was also her brainchild, opened in 1926 and designed to be the template for other Houston city libraries. The Spanish Renaissance Revival building of cream-colored brick has lovely archways, and a knock-out interior of detailed woodwork and marble columns. It served as the Houston Public Library main branch until 1976, when the more modern multistory Jesse H. Jones Building opened next door. Renovated in 2011, today it’s home to the Houston Metropolitan Research Center, an impressive collection of books, articles and research focused on Houston and Texas history.

Past/Present: Sam Houston Park
1000 Bagby
Perhaps now best known for the collection of historic houses, Sam Houston Park’s roots date back to 1899, when Mayor Sam Brashear appointed a committee to create a city park. Its gently curving footpaths and a placid stream echoed its Victorian Era counterparts around the country. As Houston hit the mid-20th century, and began tearing down older homes to make way for newer offices and towers, the Houston Heritage Society was created with a mission to save them. The first one preserved, the Kellum-Noble House, sits in Sam Houston Park, alongside about a dozen other structures preserved and looked after by the society, which has offices adjacent to the park. Modern Houstonians still use Sam Houston Park for its intended use today, whether for major Downtown events, or a quiet lunchtime stroll.

Past/Present: Sweeney Clock
Tranquility Park
The timepiece originally stood outside the J.J. Sweeney and Co. Jewelry Store on the corner of Main Street and Prairie Avenue from 1908 to 1928. It would be placed in storage until Houston City Councilmember Lee McLemore saved it and had it placed here in 1968.

Past: Albert Thomas Convention Center
Present: Bayou Place
500 Texas Ave
A bustling dining and entertainment hub today, with spots such as the Hard Rock Café, Revention Music Center and the Ballroom at Bayou Place, the 130,000-square-foot Theater District landmark is the former Albert Thomas Convention Center. Thomas spent 29 years as a Houston Democratic congressman and was instrumental in bringing NASA operations to Houston. The convention center opened after his death in 1967, and when Bayou Place was developed about 30 years later, a replica of Thomas’ office was built, complete with a U.S. Congressional seal on the wall and photos of Thomas with luminaries like President John F. Kennedy. 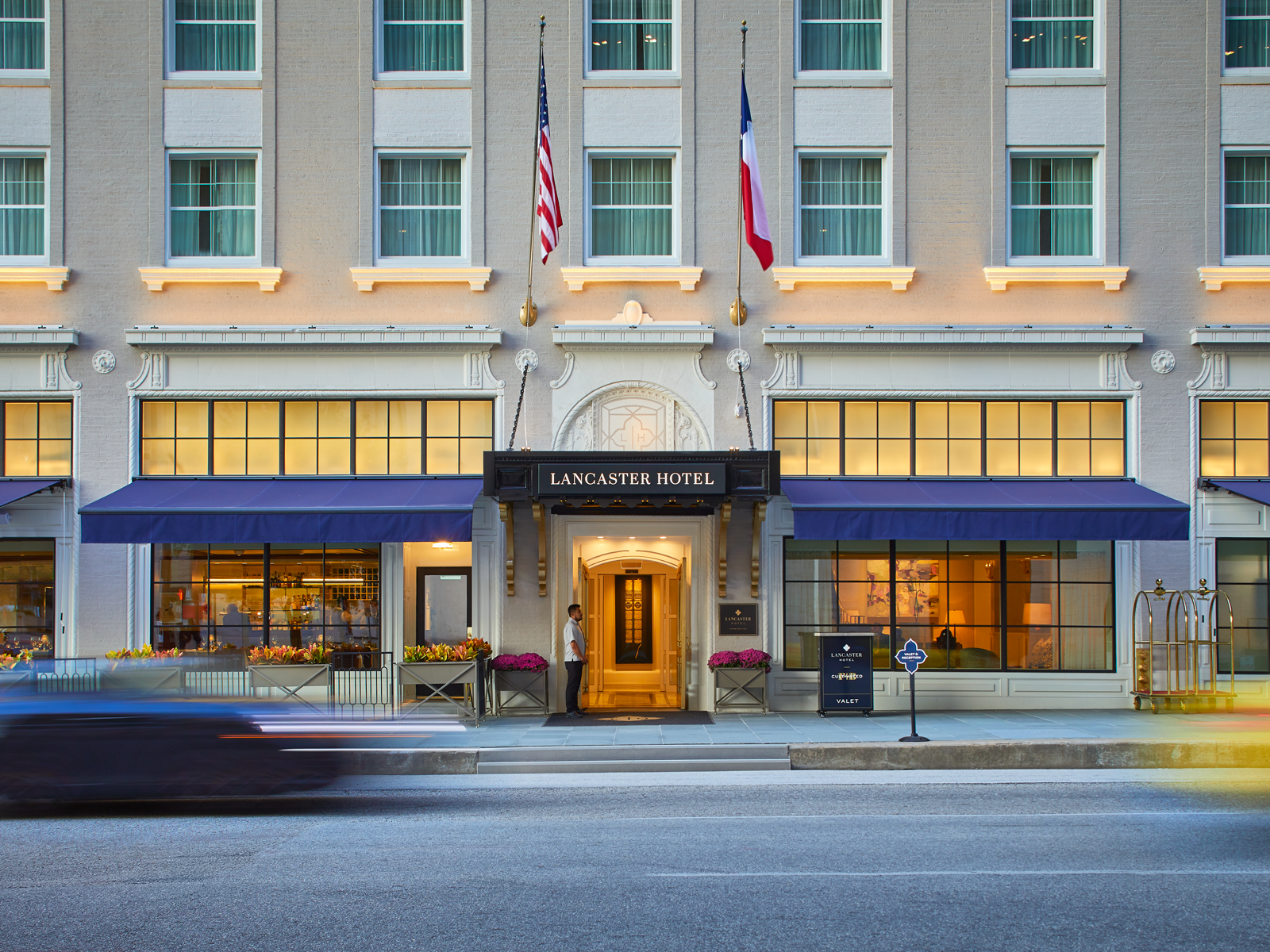 Past: Auditorium Hotel
Present: Lancaster Hotel
701 Texas Ave
The longest-operating hotel in Houston, this Texas Historic Landmark was built in 1926, beginning its life as the Auditorium Hotel. The kind of place that attracted the likes of Clark Gable and Gene Autry, it hosted a Stage Door Canteen for enlisted servicemen during World War II. The Italian Renaissance building was renovated in 1982, when it was re-christened as the Lancaster. In 2017, after four generations of ownership by the Lusk and DeGeorge families, it was sold to artist Jay Shinn, who renovated it yet again and filled the 93-room property with works from his own art collection.

Past: Gulf Building
Present: The Jones on Main
712 Main St.
This soaring Art Deco skyscraper was completed in 1929. It would remain the city’s tallest building until 1963, when the Exxon Building surpassed it. Officially called The Jones at The JPMorgan Chase & Co. Building, today the mixed-use, multiblock space is a stunning marriage of past glory and modern amenities. Luxury residential space shares quarters with smart office arrangements, and a host of retail including the bustling Finn Hall food hall. It retains many of its original details, including wide gathering spaces, stratospheric ceilings and striking art deco architectural touches.

Past: Kress Building
Present: St. Germain
705 Main St.
Built in 1913, this eight-story terracotta treasure was an immediate destination for Houston shoppers, who flocked here for clothing and home goods. S.H. Cress & Co. began as a five-and-dime store, but would evolve into a department store as well-known as Macy’s and Lord & Taylor. Now luxury loft condos, the St. Germain captures the essence of historic Houston with nearly century-old original wood floors, high ceilings and huge windows, while embracing the necessities of 21st century life, like a roof deck, state-of-the-art kitchens and concierge services.

Past/Present: Esperson Buildings
808 Travis St.
This incredible complex in the heart of Downtown is also the heart of an exquisite Houston love story. Niels Esperson was a Danish immigrant involved in real estate in Oklahoma when he met Mellie Keenan, a Kansas native who moved to the Sooner State with her mother and stepfather as a young woman. Married in 1893, the two moved to Houston in 1903 quickly establishing themselves as the power couple of their day. As Niels became a developer of the Humble oilfield, Mellie learned the ins and outs of the oil business. Niels died in 1922, leaving Mellie a wealthy widow. Five years after his death, she would construct the Italian Renaissance tower that bears his name above the entrance, having traveled to Europe for building inspiration. Nearly two decades later, the adjacent Mellie Esperson Building would be built, a grand art deco design that was the largest building project in Houston during the Great Depression.