Nearly a quarter century ago, it was hard to imagine that a small company brewing beer out of a warehouse in Northwest Houston would become an indelible part of the city’s landscape. In 1994, a time when Houstonians—and Americans, for that matter—didn’t drink a lot of craft beer, no one could have predicted Saint Arnold Brewing Company’s future.

But with hard work and a steadfast dedication to creating quality products, the brewery named for the patron saint of beer has become an icon unto itself, for the Texas craft beer industry and for the city of Houston.

With the recent addition of the brewery’s own beer garden and restaurant, founder Brock Wagner has realized a dream decades in the making, and Saint Arnold has a space befitting its representative role in the Houston brewing scene. 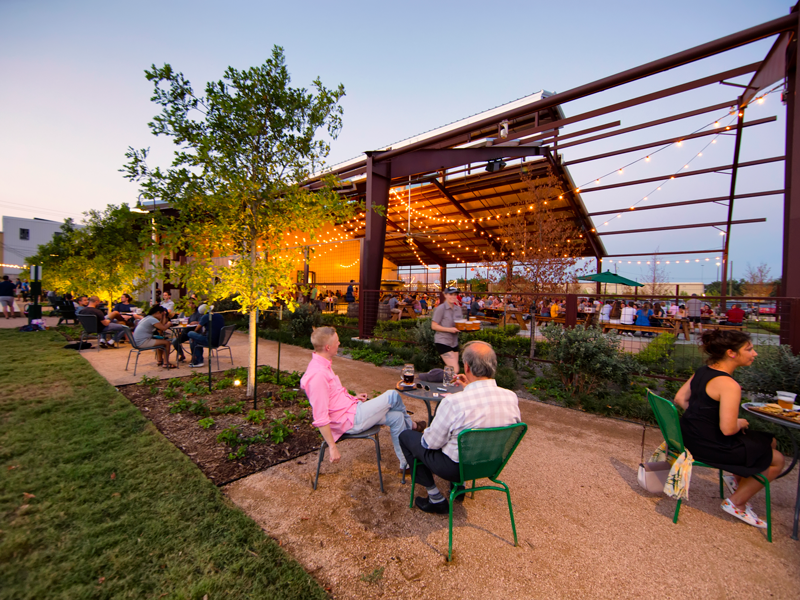 In 1994, when Wagner and then-business partner Kevin Bartol sold their first keg, Texas law would not allow a brewery to sell beer directly to customers. Under the state’s three-tier system for beer sales, manufacturers could only sell to distributors, who in turn sold to retailers, who then sold to customers. Because Saint Arnold operated under a manufacturer’s license, the brewery could not sell directly to customers onsite. Though Wagner dreamed of a beer garden, he chose to engage customers through free brewery tours.

Despite the legal limitations, production and sales were healthy, growing at a steady rate over the years. In addition to Saint Arnold’s focus on crafting quality beer to exacting standards, Wagner understood the value of becoming a strong presence in communities throughout Houston. Over the years, smart guerilla marketing, in addition to sponsorship of local causes and hosting community events like the Saint Arnold Pub Crawl, helped the brewery become a household name in the Bayou City. In this way, the patron saint of beer became the patron saint of Houston.

As the brewery grew, it was obvious that a new facility was necessary. In the latter half of the aughts, it was obvious to Wagner—who bought out business partner Bartol in 2003—that they had outgrown their original facility. Though it would have been easy enough to find low-cost land on the outskirts of the city, the location of the brewery was not something Wagner took lightly.

“Since our goal was always to build community through our passion for beer, but also to create an institution Houston was proud of, we wanted to find something close to Downtown,” says Wagner.

In 2008, he closed on the building at 2000 Lyons Avenue that remains the center of the brewery’s operations today. The massive red-bricked building, which previously housed a Houston Independent School District food service warehouse, offered 104,000 square feet. When the build-out was completed in 2010, the three-story facility included a stainless brew house from a former Bavarian Brewery, a German-inspired beer hall and small kitchen, an English-style investor’s pub space, bottling and kegging operations, and offices for staff.

The facility marked a new chapter for the brewery’s production ability and for the Downtown community, offering guests a comfortable space to eat lunch, wait for one of many daily tours, or rent out the beer hall for special events.

Then, in 2013, a legislative victory allowed breweries in Texas to sell their own beer for on-premise consumption. This law soon became a catalyst for the explosion of microbreweries in Houston and around the state. With the new legislation in place, Wagner realized Saint Arnold would have to evolve.

“Once we succeeded in getting the laws changed in 2013 to sell beer directly to the public for on-premise consumption,” says Wagner. “We realized we could change how we did business to take advantage of that.”

This realization meant big, but exciting changes. It was finally time to create Wagner’s dream of a beer garden. 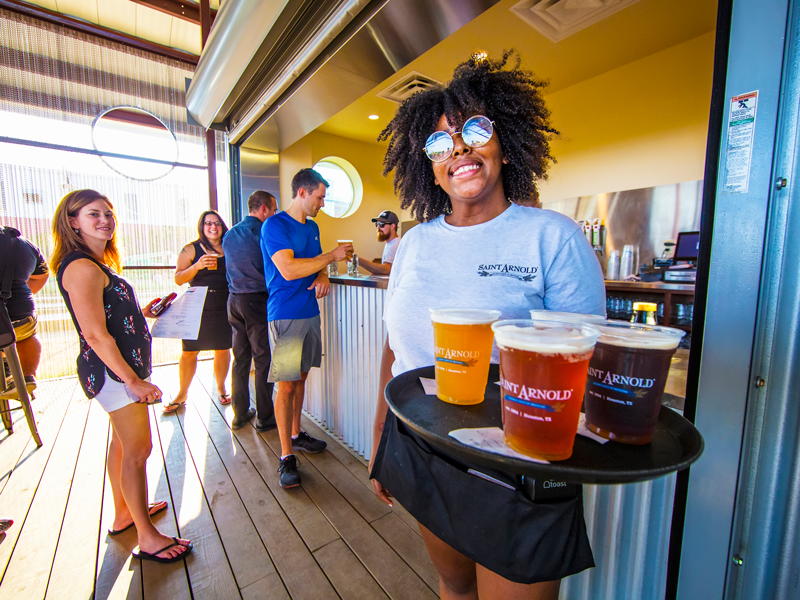 A New Era As Saint Arnold Grows Up

The grand plan for a new beer garden and restaurant became a reality in the summer of 2018, when the doors opened to the public. Located just east of the main building on Lyons Avenue, it’s impossible to miss the large structure and its "dissolving metal building," created with the help of Natalye Appel + Associates Architects. Wagner was looking for a way to blend in with the neighborhood, and confirms the deliberate nature of the design and its connection to the current community landscape.

“We built the metal building next door so it looks like another industrial building. But we wanted to surprise people when they see what it really is,” says Wagner.

And surprise it does. High ceilings and an arched roof tower above the ground, creating the same sense of wonder one might feel walking into a grand Old World cathedral—if it were made of modern industrial materials and gradually tapered off into the negative space of a blue Texas sky.

Beneath the floating roof, visitors find themselves in a meticulously designed environment dotted with architectural embellishments inspired by brewery elements. A mesh metal fence with circular windows subtly plays on the notion of rising beer bubbles. Water falls from a fountain made from the top of a brew kettle, bringing a zen-like feel to the large space full of picnic tables, colorful Adirondack chairs, rockers and umbrellas designed to encourage conversation and fellowship. Wagner says they wanted to “create architecture that drives interaction between people.” With the addition of bocce ball courts and a corn-hole area, the outdoor space is an adult version of a playground that’s also family friendly. It feels oddly—yet rightly—like an urban oasis.

The magic feeling continues inside the attached restaurant, which is housed in a church-like building complete with high wooden arches, metal chandeliers, and fresco-like works of art. Walking in through large, European-style wooden doors, the eyes are immediately drawn to the colorful alcoves on the right and left, six in total, adorned with different painted themes. Wagner refers to these spaces as “chapels,” and explains that each artist was given “free reign to create an immersive art experience.” As a result, artists GONZO247, Carlos Hernandez, Nick Papas, Robynn Sanders, Matthew Schott, and Jeff Szymanski put their own spin on each space, which ranges from the classically trained Masters to contemporary street art. 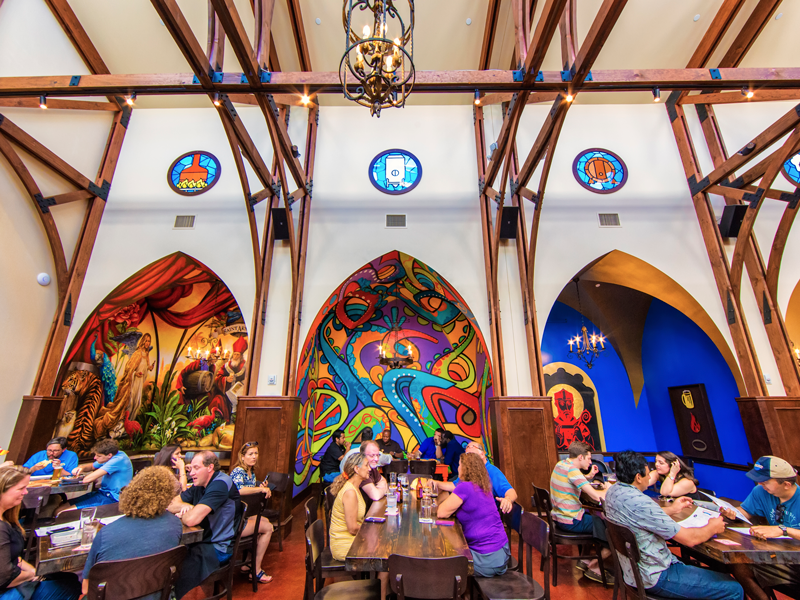 New Building, New Menu At the Altar of Saint Arnold

Of course, great architecture and beer alone aren’t enough to bring visitors to the space. With new digs and a larger kitchen, Executive Chef Ryan Savoie was able to revamp and expand the menu and return to one of his passions: pizza.

“As soon as they mentioned they wanted to build this place I wanted to have pizza, because it lends itself well to group activities and beer,” says Savoie. “The first thing I decided on was the pizzas I wanted to make.”

With roots in baking, Savoie wanted to make the dough in-house. That means the pizzas, pasta and even the bread for the favorite crawfish rolls are made from scratch.

In addition to pizza, the expanded menu reflects what Savoie calls a “happy medium” between his own tastes and the elevated pub food people want to eat at a brewery. That means classics like hamburgers and fries, along with dishes that nod to a unique Houston’s sensibility, like the shrimp and crab cakes and chicken-fried pickled green tomatoes, served with a side of Savoie’s Million Island Dressing.

With the variety of items available and the high standards of the staff, finding something that appeals to everyone is easy to achieve. Menu items come with a suggested beer pairing (of course), and reflect Chef Ryan’s sense of humor and former life as a writer, as he writes the menu himself. With a description like, “You’re grown as hell and don’t need the man telling you how to snack. Thusly, we offer three versions: Jerk, Fire Emoji, and BBQ. Also plain if you simply can’t hang,” how could you not order the wings?

All told, the menu, the food, and the environment feel like the beginning of a new era for the iconic brewery—a place to appreciate Houston and Downtown; and a place to bring visitors and show off a little, too. To see the sleek modern space, it’s hard to believe the brewery’s humble beginnings. Saint Arnold Brewery is many things to the city it calls home, and its latest addition is an impressive, if not surprising feat for Texas’ oldest independent craft brewery.

Next time you’re looking for an escape, head to the beer garden at sunset, as day descends into a cotton candy-hued evening. Parked in a colorful Adirondack chair with a cold beer in hand and a fine view of the Houston skyline to the southwest, take a moment to appreciate this amazing new space and the city that made it all possible. Cheers.