Small businesses are the heart & soul of #DowntownHouston. We encourage you to continue supporting local. Click here to see a list of restaurants ready to serve you. #houstonstrong
Print
Share
0
Feature
Houston Grocery Store On Wheels
Photo: Morris Malakoff

An act of service. A bounty of flavors. A sense of home and connection to community.

That’s what cooking should be.

A meal is often preceded by maneuvering a crowded parking lot, braving a gauntlet of jousting carts, and participating in a hurried check-out transaction that removes meaningful interaction from both buyer and seller. Anyone who’s decided to order takeout after a long day knows that the typical grocery shopping experience can strip dinner of its magic long before food hits the plate.

But there’s a promising solution for Downtown residents in the form of Grit Grocery, Houston’s first mobile grocery truck. Every Thursday from 4 p.m. to 9 p.m., the truck parks at 900 Preston, just east of Market Square Park, catching the attention of passersby with its colorful display of locally farmed and sourced produce, meat, seafood, and specialty cheeses, in addition to sundry items like bread, pasta, Texas-made olive oil and ice cream.

Unlike food trucks, which serve as mobile versions of casual restaurants, Grit takes a long view on its goal to nourish the community, as a different kind of grocery store catering to urban residents. The flexibility of a grocery truck means that food can move into the heart of a neighborhood, unlike brick-and-mortar stores that stay anchored to the perimeter. In essence, it’s a microcosm of a farmer’s market that also happens to be mobile; a community solution for a quick, healthy and convenient meal for Downtown residents. 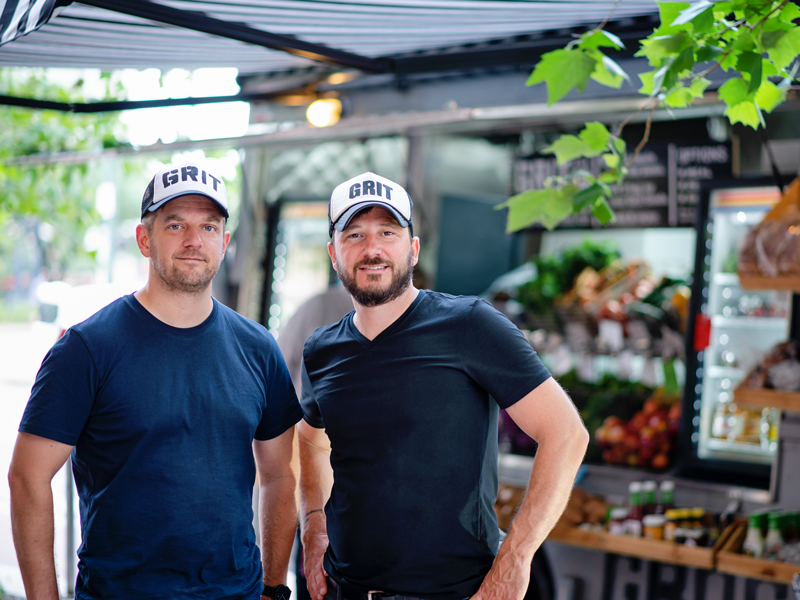 The Start of Something Different

When Grit Grocery started preliminary operations in 2016, the modern grocery landscape reflected an interest in cooking at home without the hassle of traditional grocery shopping. Meal delivery services like Blue Apron were well-established, and curbside pick-up programs at traditional grocery stores like H-E-B were gaining steam. But Grit’s founders—Jamal Ansari, Michael Powell, and Dustin Windham – —recognized that even with the creation of more convenient options for home cooks, there were still important elements missing from the experience – most notably, a connection to food and the people producing and selling it.

The idea for the business initially came to Windham as a result of his stint as a Peace Corps volunteer in Azerbaijan.

According to Windham, the experience “introduced me to cooking from scratch, to buying with a neighborhood food model, [and] buying unprocessed [food] – not because it was cool, but because that was the infrastructure they had.”

Living according to local customs meant walking to purveyors and buying food in small quantities, buying only what was needed for the next day or two. Windham noted that he and his fellow American volunteers ate healthier and all lost weight as a result, and it gave him a new appreciation for a better way to interact with food. Despite this knowledge, when he returned to the United States, he found it difficult to buy food the way he wanted to because of the “big box” grocery store infrastructure.

When Windham entered the Rice MBA program, he got the idea to apply his ideas about food into the business that would become Grit, and partnered with fellow MBA candidate Jamal Ansari to launch and test the concept after graduation. According to Windham, the name for the business is evocative of audacity and authenticity.

“Think about the farmer handing you a bunch of carrots with dirt under his nails and sweat dripping from his brow,” says Windham. “Grit is a metaphor for an authentic food experience and we have that in mind with everything we do and every product we sell.”

Even in its conceptual phase as a minimal investment – using Igloo coolers, batteries and spotlights – the truck proved that the market could benefit from a different kind of community-based grocery store. Michael Powell, who holds a PhD in cultural anthropology and a decade of experience in grocery design and research, joined as the third founder when he realized Grit was “offering something very different” that grocery stores couldn’t or wouldn’t do.

That key difference is Grit’s focus on creating convenience and community for its urban customers. 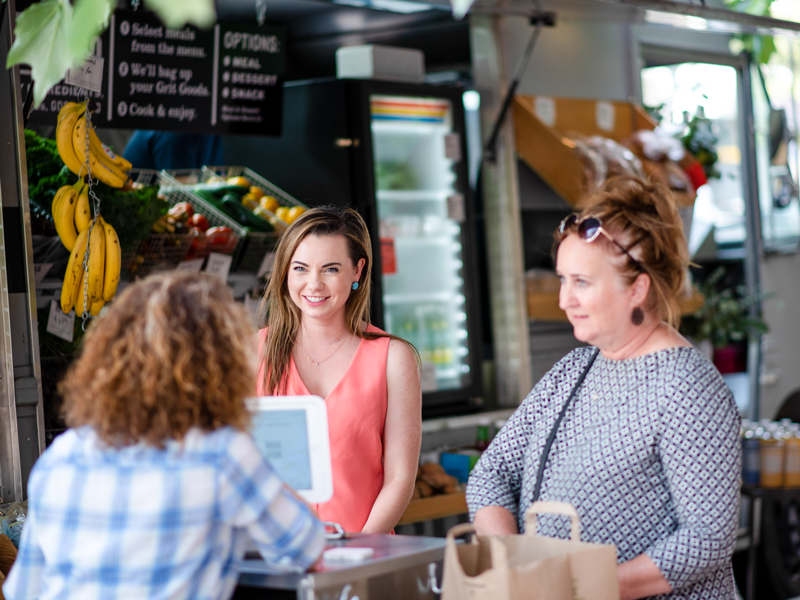 Residents in the heart of the city have different lifestyles and grocery needs than suburban shoppers. The Grit founders cater to urban residents using what Powell calls a “very solution-oriented” approach. For example, when they chose the Market Square Park location to service Downtown residents, the Grit truck was placed in an area where people frequently walk and bike in the evenings. The truck’s hours – 4- 9 p.m. – were set to service residents on their way home after work.

Approaching the truck, shoppers will find a mix of around 300 locally sourced products, rather than the thousands available at a typical grocery store. The pared down product mix emphasizes produce, but includes what Powell describes as “everything you need to put together a meal that's going to be healthy and fresh.” That includes local dairy, fresh-squeezed juice, sustainably raised protein, healthy picnic snacks, and meal bundles, which rotate according to availability and include a recipe and all the ingredients needed for a single meal, such as shrimp and pasta or pork chops with sweet potatoes.

Products come from local vendors and farms like Gundermann Acres, a 500-acre farm 60 miles southwest of Houston that supplies the region with quality produce year-round using sustainable agriculture. Even staples and dry goods on the Grit truck benefit local food artisans, like the pasta from Fabio’s Artisan Fresh Pasta in Montrose.

The Grit proprietors understand that their products are only successful as the people that cook them, so they’re especially interested in product combinations that can be prepared in 20 minutes or less. Simplifying the options helps customers focus solely on what they need to prepare for the evening’s meal or for the next day. Instead of purchasing a carload of groceries in bulk, buying small alleviates food waste and ensures freshness. Customers hoping for a little dessert won’t go wanting, either—local ice cream and chocolate can be purchased alongside the produce for those with a sweet tooth.

Though price isn’t the only deterrent keeping customers from shopping healthy and local, food costs weigh heavily on a consumer’s choices, and the Grit partners know it. Current pricing for Grit products is competitive with Whole Foods, but Powell notes that prices will drop as they scale operations and create more trucks. Until that happens, they want to raise the conversation about food costs and call awareness to why certain groceries – like sustainably raised chicken, for example – cost more than their conventional counterparts at a traditional grocery store.

They also want the act of buying and selling food to be interactional rather than transactional, with trained and knowledgeable Grit staff. Not only will they intimately know the products and their origin stories, they’ll be able to guide customers through the best way to prepare each item. By offering cooking techniques and thoughts on interesting flavor combinations, the exchange is meant to educate as much as satiate consumers. 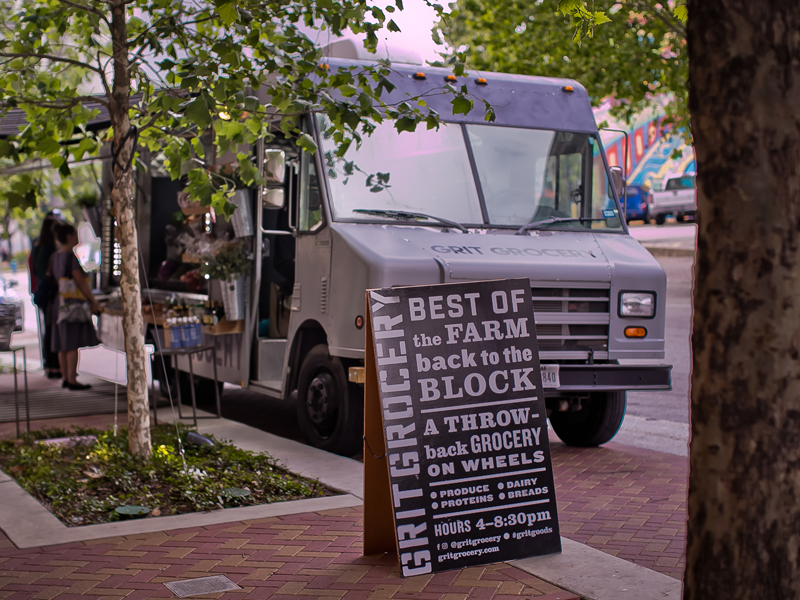 Growing Into the Future

With more residential buildings on the horizon and the increasing desire to live and shop within a radius that doesn’t require a car, there’s no question that Downtown’s food landscape must shift in the next few years to meet the demand. As Houston’s only mobile food truck company, Grit’s short record of success proves that it could be integral to a growing residential neighborhood that values personal interaction and a transparent local farm-to-truck foodway.

Since Grit began in 2016, it has steadily grown its customer base and operations, been endorsed by Mayor Sylvester Turner, and partnered with the City of Houston as part of the Complete Communities Initiative. A successful equity crowdfunding campaign earlier this year raised enough money for the company to lease a commercial distribution facility and office that serves as a company base.

In the current business model, Grit serves as many urban neighborhoods as it can by parking in a specific neighborhood on dedicated weekdays—that’s why Downtown residents will find the truck on Preston street every Thursday. Other locations include Levy Park, Circuit, and Emancipation and Buffalo Bayou Park on Sabine Street. As the company continues to grow, Downtown residents can look forward to additional weeknights with the construction of new Grit trucks, a plan put into motion with the construction of a second truck this spring.

In the meantime, if the initial welcome is any indication, residents seem to be embracing a company that understands the important connection between grocery shopping and community building. Together, Houston business owners, food producers, and residents create a sense of place, a sense of home and some darn good meals in the process.