Houston’s Museum District has some of the greatest collections of art in the country. Walk the streets of Downtown, however, and you’ll also be surrounded by art. From sculptures on city streets, to pop-up installations in parks, to murals on the walls of buildings, art is everywhere. Don’t miss these great works! 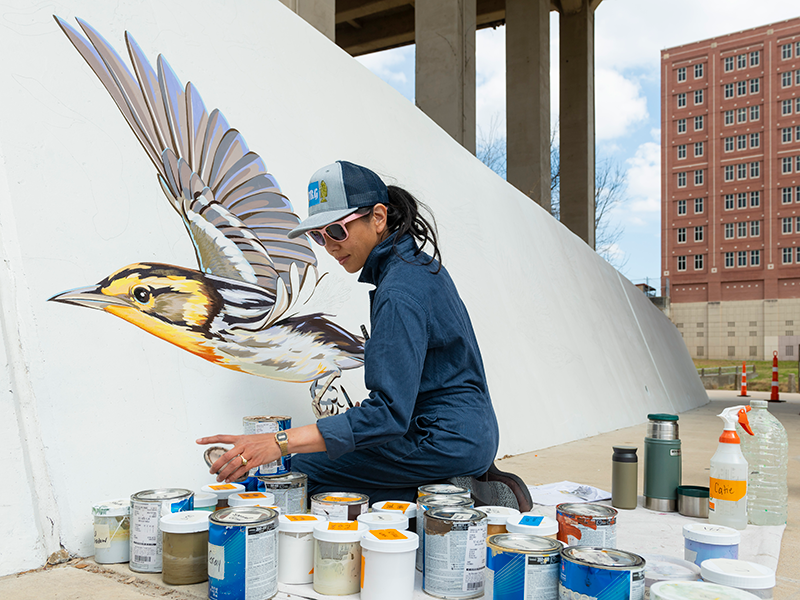 CONFLUENCE
University of Houston Downtown
View it: Underneath UHD’s One Main Building, 1Main Street
This 223-foot-long mural was commissioned by the Houston Parks Board and the Buffalo Bayou Partnership, and was painted by artist Jane Kim, a co-founder of Ink Dwell Studio. It’s painted on the retaining wall at the confluence of White Oak and Buffalo bayous and is an homage to Houston’s migratory birds. The sweeping work undulates along the bayou, showcasing three species of birds that come to Houston every spring looking to breed and three others who come to the Bayou City for the winter. As birds often change their plumage to attract mates, the artwork shows the birds in their breeding and non-breeding plumage. The birds are partnered with a map of Houston’s bayous, a reminder of the life the waterway brings to the city.

“Adding this beautiful art piece along the bayou greenway not only enhances the landscape, it celebrates the ecology of the area, builds community and contributes to a sense of pride among all who interact with it,” said Elisa Olsen, UHD’s executive director of university relations, who says the piece complements existing artwork on and adjacent to the campus.

Installation on the mural began in March and took nearly six weeks to complete. Areas along the bayou are already Instagram friendly. This new mural will more than likely be one more great spot for selfies, as pedestrians and cyclists take in the work 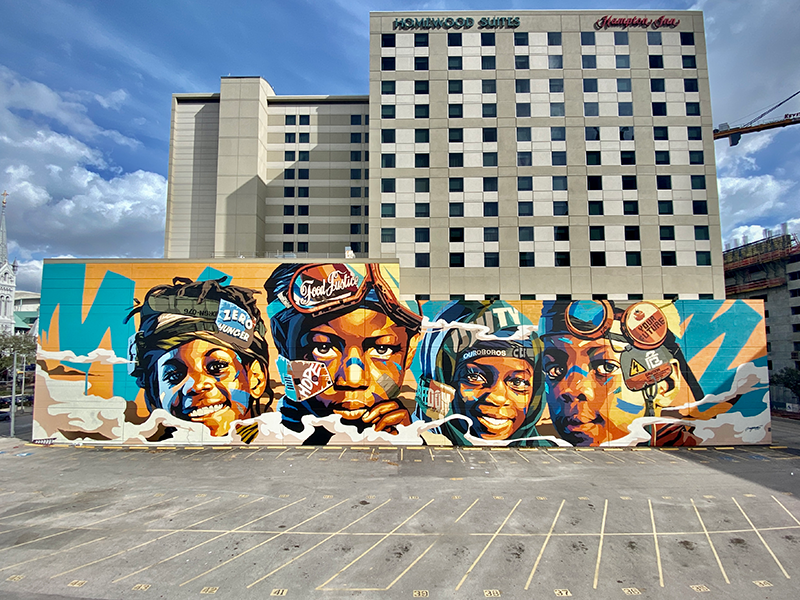 ZERO HUNGER
West side of the Hampton Inn and Suites Downtown
View it: 710 Crawford Street
Unveiled in March, this massive artwork by Dragon76 was created to bring awareness to the problem of hunger in the Houston community. It’s part of a collaboration between Street Art for Mankind and the World Food Program, designed to showcase how widespread food insecurity is. The first mural appeared in New Orleans in February. Four more are planned throughout the country.

The Downtown mural is the largest in the city. It takes up the building’s five stories and measures 13,000 square feet. Communities of color are disproportionately affected by food security issues. Zero Hunger features four African-American children with Zero Hunger and Food Justice written along their foreheads. While the mural calls attention to a serious issue here in the Bayou City and elsewhere, it’s also awash with hope. A bright blue zigzag runs across the backdrop. Two of the children boast big smiles. The golden yellows and earth tones make for engaging viewing.

“It creates a huge statement to support the work of the UN @worldfoodprogramme, advocate for the 169 million people who face food insecurity around the world and reminds people that hunger also exists in the United States, especially among the African-American communities,” Street Art For Mankind wrote in an Instagram post announcing the project. 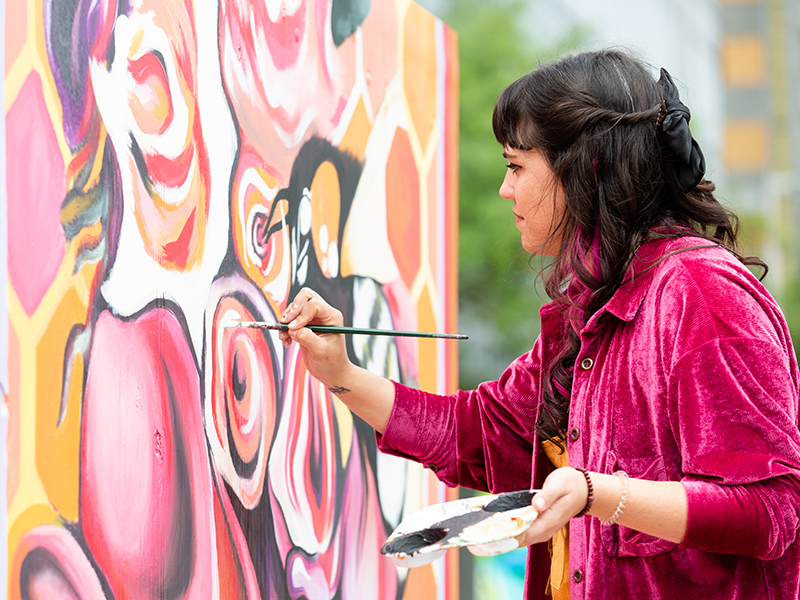 EARTH DAY MURALS BY TEXAS ARTISTS
View them: Discovery Green Park
The 13 murals that make up this temporary installation showcase the beauty of Houston’s natural environment. Discovery Green put out a call for works earlier this year. The finalists were selected from more than 100 entries. As part of the parks’ Green Mountain Energy Earth Day celebration in April, the artists did live painting on their murals.

“I wanted to create a mural that showcased iconic animals that call the Big Thicket and Texas home,” said Wendy Delgado, who creates art as Usagi Wasabi. Her mural features a bobcat, coyote and armadillo, and is called Spirit of the Big Thicket. Each animal is made of plants and they’re surrounded by a starry sky, a nod to the fact that Texas is one of the only places you can see the Milky Way at night. “I hope to show the beauty of these animals and the important role they play in the balance of the unique ecosystem we have in Texas,” Delgado said.

Hannah Bull’s Bee Sweet, Y’all mural explores how vital the fuzzy pollinators are to our lives. A third of food crops, wildflowers and honey owe their existence to bees.

“I hope the colorful capture of my painting inspires people and grants awareness not only to bees' physical beauty but their integral function in an effort towards a rewild mindset that treats nature with care and as equals,” the artist said of her work.

Artist Melissa Aytenfisu looked close to home for the inspiration for her mural, Urban Gardeners. During the Covid pandemic, the mother of two, like so many, found herself without work, without school for her children and with no place to go. So the family began visiting parks and soon discovered a community garden in their Third Ward neighborhood.

“One of the gardeners took my 4-year-old under his wing,” she said. “And he just loves gardening now! We grew our own broccoli, and we’ve done radishes and chives. I think people really have an innate desire to explore in nature.”

Her mural captures her children’s excitement about the community garden.

The murals will be on display through October. 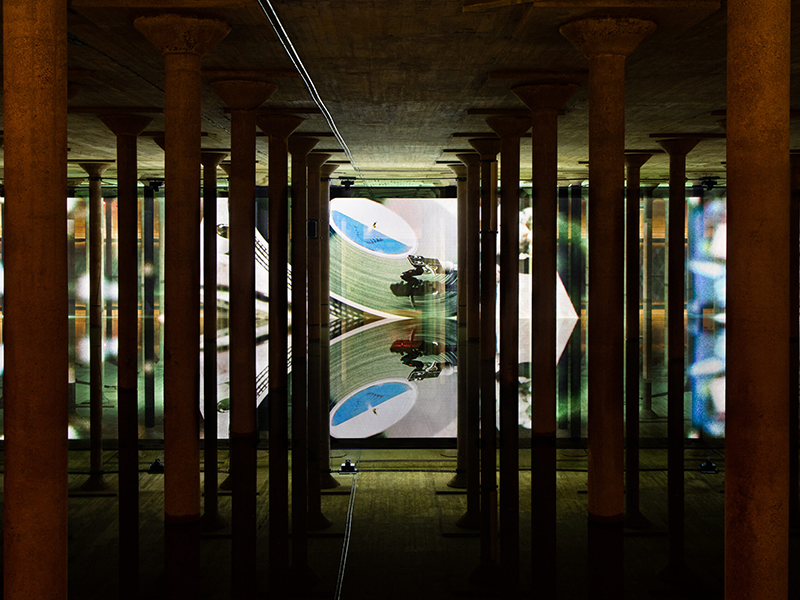 TIME NO LONGER
View it: Buffalo Bayou Park Cistern
This immersive experience blends film and sound in a creation by multimedia artist Anri Sala. The film is projected onto a 22-by-150-foot screen, its soundtrack echoing throughout the Cistern’s vast space. That provides a 360-degree experience for visitors, who see and hear the piece through the Cistern’s 221 supporting columns.

Time No Longer shows a turntable floating in a space station, its electrical cord still plugged in. As the turntable floats in space, it continues to play a vinyl record, although there doesn’t appear to be anyone around to listen to it. The record playing is a new arrangement of Olivier Messiaen’s Quartet for the End of Time. The composer wrote the piece while he was held as a prisoner of war in Germany during World War II.

Sala created the work specifically for the Cistern’s dramatic space. 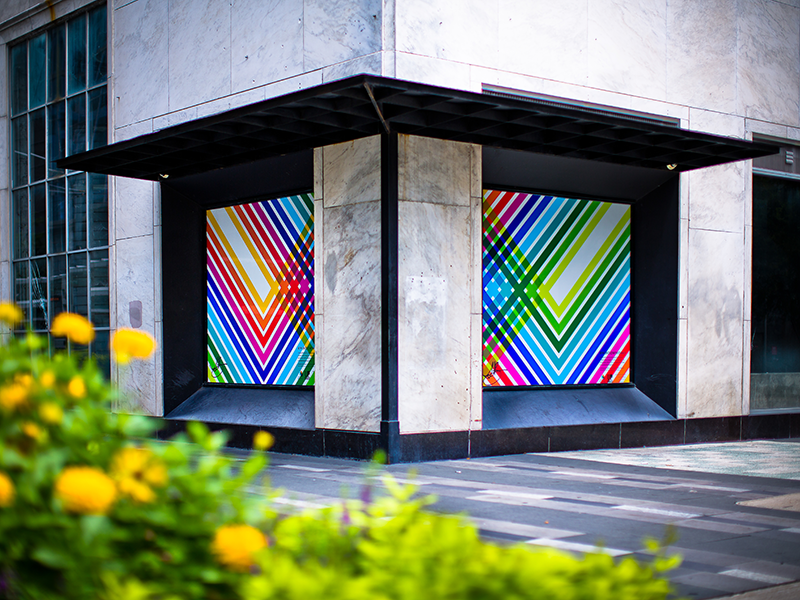 WINDOWWORKS BY VARIOUS ARTISTS
View them: In storefronts around Downtown
This ambitious project, a partnership between the Houston Downtown Management District and UP Art Studio, infuses new life into windows all along Main Street. Vacant and inactive storefronts have been transformed into artists’ canvasses, and the result is a dynamic set of artworks showcasing different styles and subjects.

“I loved the idea of using the empty location's store fronts as opportunities to create an art gallery exhibition for everyone to enjoy,” said Steffany Brady, whose mural Brilliant Tapestry can be seen at 1111 Main. The design was inspired by Downtown itself.

“I wanted to create a quilted like design, fabric or textile, a visual representation of the colorful tapestry of Houston's vibrant community,” he said. “I also wanted to create an orthogonal composition that could resemble the orthogonal nature of Downtown's city grid.”

A few blocks away at 1313 Main, Feels Like Summer is an explosion of color and feel-good vibes.

“We wanted to portray something fun and colorful to bring more life to Downtown,” according to creator DeeJon. DeeJon is the collaboration between Marjon F. Aucoin and Dandee Warhol, who blend classical and contemporary design in their work. The mural captures the fun enthusiasm of the season, with bright colors and pop art motifs.

“When we sketch our images, Marjon usually comes up with the conceptual ideas, and Dandee will come in and start adding colors and patterns to balance the piece,” the couple said of the way they work. “Marjon will paint the realistic components of the piece. She’s a master in the technical aspects of the human figure and anatomy. Dandee’s role is to create a balanced composition using shapes, colors, and values, which is mind-blowing because he is color-blind. In the end, we find that our pieces become a visual conversation between the two of us. Our two very different styles merge to create something bigger than what either one of us could have planned for individually. This ultimately keeps our creativity continuously growing and the possibilities endless.”

For viewers, the possibilities will seem endless as well. There are 18 murals along the windows of Main Street, and more beyond. Visit houstonmuralmap.com for a full list that offers plenty of inspiration for a self-guided tour.