Small businesses are the heart & soul of #DowntownHouston. We encourage you to continue supporting local. Click here to see a list of restaurants ready to serve you. #houstonstrong
Print
Share
0
Backstage
Lifting the City’s Spirits
Photo: Melissa Taylor

It’s no secret that Hurricane Harvey pummeled Houston’s Theater District: 270 million gallons of water in the parking garages, theaters wrecked, administrative offices out of commission, and all around catastrophic damage. Though both the district and the city are dealing with recovery efforts that will take several years and billions of dollars, there was never a question that the performing arts companies would continue with their seasons. In addition to finding creative ways to deliver the world-class performances their patrons have come to expect, the Theater District used its artistic gifts to help the city express its resilience.

AT THE ALLEY
Alley Theatre experienced some of the worst damage in the Theater District to both its home theater and administrative offices. Mary Sutton, director of education and community engagement at the Alley, describes being in a holding pattern after the storm, not knowing when they could get back into their offices and having no way to communicate to the many schools across Houston where their educators provide teaching residencies.

“We were eager to do something, so we started thinking creatively about how we could reach out to the people that needed it most, and this idea of Alley Recess was born,” explains Jenny Lamb, curriculum and teaching manager in the Alley’s Education and Community Engagement Department. 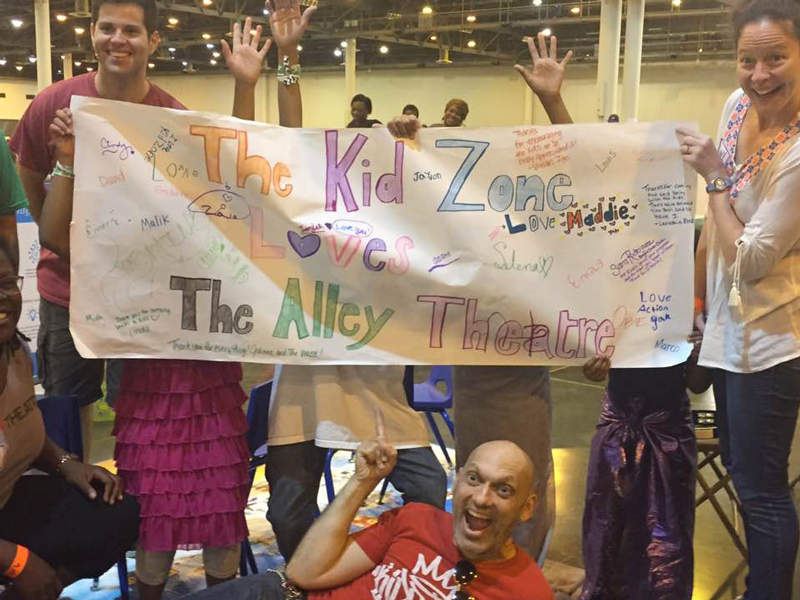 Every afternoon for a week and a half after Harvey, Alley Teaching Artists spent time engaging with children temporarily living at the NRG Convention Center. Activities ranged from theater and music games, dress up and fashion shows, to storytelling and juggling lessons. Because the housing situation of those in the center was in flux, Lamb says it’s hard to estimate the number that participated each day: “A soft estimate would be a hundred.”

In a time when their worlds had been turned upside down, Alley Recess wanted to give these kids a space to just be kids again. At its most basic function, it was something for them to look forward to every day, restoring a sense of normalcy in very un-normal circumstances.

Lamb recalls seeing children forgo the popular computer station for a few hours, eager for Alley Recess. “One young girl ran in one day and said, ‘I’m glad you’re still here! I didn’t want to miss one single day of this!’ I think the Alley Recess gave them hope that things will get better, it tapped into their inner sense of resilience,” she says.

As part of their continuing efforts to help students process the devastation of Harvey, Alley teaching artists will address the storm in their popular Oskar Series at almost 85 schools this spring. Typically, the Alley education staff tour this series to about 59,000 students in the Houston area. Each of the plays, which are written by Alley staff, feature a young man named Oskar and explore themes of character education. The newest Oskar play will relate to overcoming the damage from the floods. 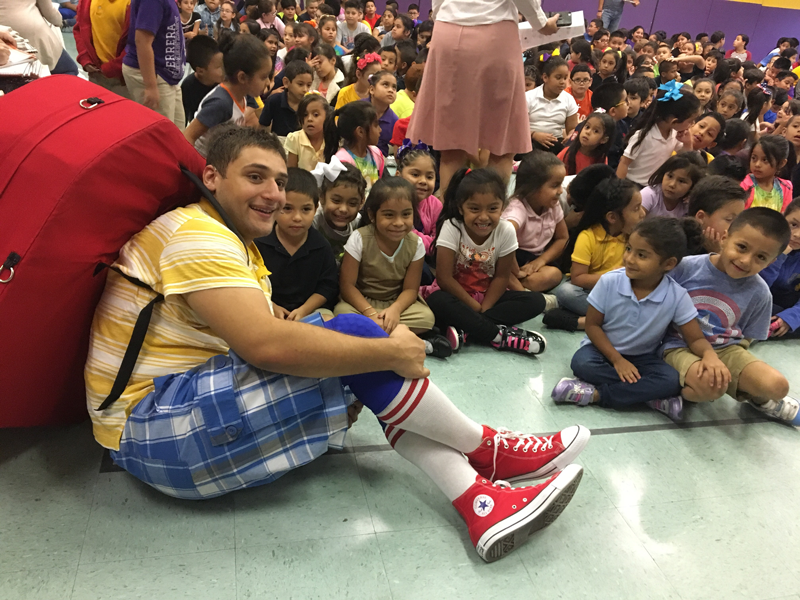 “It’s sort of a celebration, because we don’t want kids to relive the trauma, but to reflect on all the tools they used to move through the discombobulation of Harvey,” explains Sutton. She hopes the Oskar Series will speak to both their inner -resilience and problem- solving skills.

Sutton knows that every class will have a mixture of students that experienced flooding first-hand and those that watched the events unfold on the news. She and her team hope to tap into the strength of the children and celebrate their having come out on the other side of a massive disturbance.

THERE IN A TIME OF NEED
Houston Symphony found itself facing several challenges in the days following Hurricane Harvey. Because of Theater District flooding they couldn’t get to their offices, communication between staff was limited, and performances needed to be canceled and rescheduled. While leadership worked to navigate a path forward from the unprecedented disaster, Symphony musicians quickly assembled to bring some reprieve to flood victims using their exceptional musical talents. Over the course of nine days, about 25 musicians gave 20 performances at the Red Cross, George R. Brown Convention Center, Salvation Army, and other shelters across the city.

“It’s not something the administration asked them to do,” explains Amanda Dinitz, interim executive director and CEO of Houston Symphony. “I thought their actions were very reflective of the resilience that we saw from members from the entire Houston community.”

It’s estimated that up to 42,000 people had to find emergency shelter during the flooding. Many of the artists playing in the shelters were affected by the storm themselves, but they wanted to contribute their music towards helping their fellow Houstonians. “It’s one of the benefits to having 88 of the world’s finest musicians live in Houston as a part of the community,” she says. 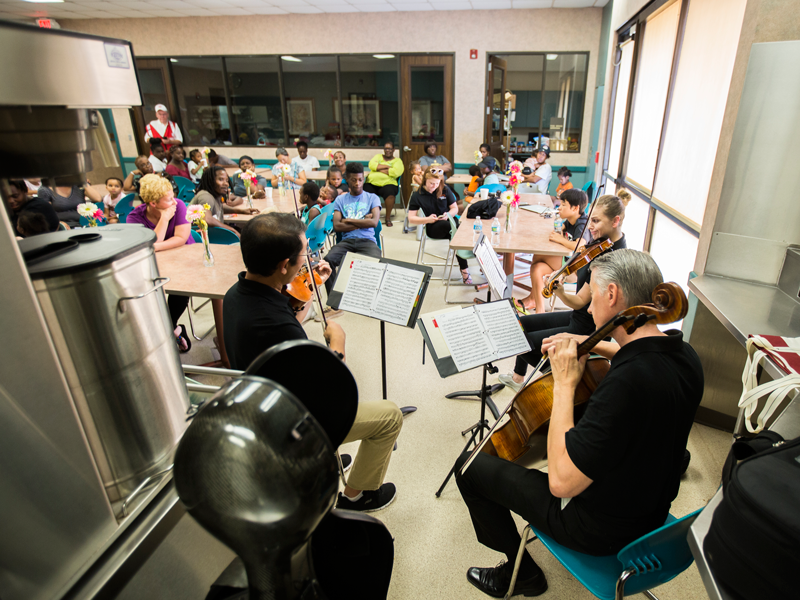 Beyond these efforts the Symphony believed they as an organization could play a role in lifting Houston’s spirits. In the wake of the storm there were numerous conference calls about the desire to begin the season as soon as possible.

“We are a nonprofit, we are a cultural arts provider, and we have talented musicians ready to get on stage for a community that needs music and peace and joy now more than ever,” says Dinitz. With Jones Hall temporarily out of commission, the Symphony worked with Rice University to move some of their performances to the Shepherd School of Music. Recognizing the needs of the community, the Symphony decided to make the concerts free. “It was really important to us to do everything we could, not only to provide concerts but also to make them available for anyone who wanted to attend,” explains Dinitz.

Many season regulars showed up to support the performers in the new space along with several new faces. For the Symphony, it was critical to provide some beauty in a time of great sadness and stress.

“It reminded us all how important the role of the arts is and that it has a role to play in healing the soul or spirit of a community,” reflects Dinitz. “Art is there for a city not only at its highest points, but in its time of need.”

CONNECTING THE COMMUNITY
In the days after the storm Theatre Under The Stars (TUTS) employees, like many Houstonians, swapped stories of people they knew that had been flooded or displaced. One such story was that of Kori Spaulding, a former student at TUTS Humphreys School of Musical Theatre. Kori’s account of her flooded neighborhood in Nottingham Forrest was seen by TUTS staff on Facebook and circulated throughout the organization. After reaching out to this particular family, TUTS become engaged in a larger conversation about that community.

“We realized the sheer number of people helping each other in that neighborhood and that there was something we were able to offer them,” says Hillary Hart, executive director at TUTS. Touched by both the Spaulding’s story and larger tales they were hearing about the neighborhood, TUTS found a way to offer the residents a small break from their troubles. What started as a Facebook post evolved into a free performance for over 200 flood victims and first-responders. The audience, a cross-section of Nottingham Forrest residents and the Greater Houston community, was invited to view a free dress rehearsal of The Secret Garden. The musical turned out to be a timely, though coincidental production for the company.

“There is something about the story of The Secret Garden that is so healing and hopeful and actually speaks to the Houston community,” says Hart. She believes that TUTS, and the arts in general, are in a position of to offer something special to Houstonians right now. “There’s a sense of community you experience in live theater that doesn’t exist anywhere else and makes our art form unique.”

For many in the audience, it was the first chance they’d had to get out of their neighborhood and away from the continuous headache of Harvey in over a month. For some, it was the only time they’d ever been to see live musical theater. One of the most emotional moments of the night came before the show started when 14-year-old Kori Spaulding gave a curtain speech about her story. Later, Hart says she found out that Kori’s speech had moved The Secret Garden cast to tears. 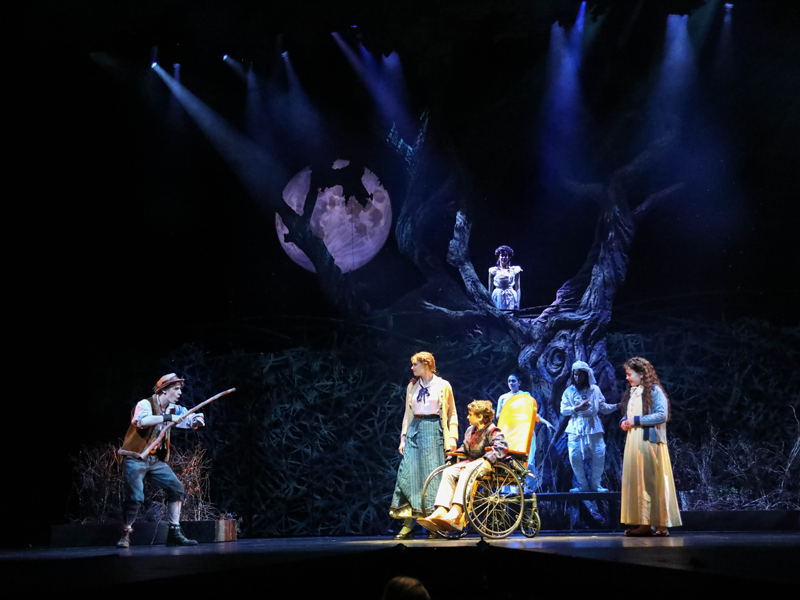 The Hobby Center, where TUTS is housed, suffered the least damage of any venue in the Theater District. During and since the storm they have worked to help with whatever resources they have to give. Hart sounds off a list of initiatives the organization has offered: “We had Teaching teaching artists at the shelters working with the displaced children, and adults, and we’ve been working with Hobby Center to accommodate the production schedules of our colleagues in the Theater District,” she says. They even extended the summer camp for a week so parents who needed them would have a place to bring their children. The list goes on.

The past few months have brought devastating losses and challenges to our city, but they have also proven just how strong Houston really is. “It doesn’t matter if you’re in one community or another, we all come together to help each other,” says Hart.

The Theater District is just one piece of the story in Houston’s long and arduous road to recovery. There is much work ahead and many are still adjusting to their ‘new ‘normal’. But, this city, and the Theater District are, proving their grit, resiliency and creativity. Houston Grand Opera, whose home at Wortham Center will be under construction until spring of next year, has opened an innovative and intimate new space at the George R. Brown appropriately named Resilience Theater. Alley Theatre, Jones Hall and the Hobby Center are all now operational and moving full speed ahead. And each of the seven resident Theater District companies are performing for a city that needs the arts now more than ever. As they say in the theater biz, the show must go on!