From the cozy wood terrace of Traffic Engineers, Inc (TEI)’s offices on Congress Street, you can see Buffalo Bayou and watch METRORail pull into the University of Houston-Downtown station. Three floors below, cars, bikes and pedestrians share the streets of Market Square. Looking down from this vantage point, it’s a microcosm of movement – fitting, really, given what TEI does.

The 46-year-old company provides a variety of transportation solutions to clients (mainly public entities) around the globe. The goal is to enhance the quality of life in the cities TEI serves, offering a way for multiple modes of transit to co-exist, taking a holistic look at the ways people get from place to place, and implementing tools to help them do it better.

Given all that’s happening on Houston’s transit scene in recent months – increased bike paths Downtown, the complete overhaul of METRO’s bus routes, pushes by citizens to have the City of Houston put sidewalks in their neighborhoods – it’s fitting that TEI chose Downtown as an address when it sought to move its operations from a building on the Southwest Freeway.

“The firm’s original location worked for the two founders of the company,” said Geoff Carleton, who handles project planning for TEI, spending his days shuttling through transit planning meetings with city leaders to hosting community meetings about needed neighborhood changes. “And the Southwest Freeway was between their two homes in Sugar Land and the Sharpstown-Alief area. About a year ago, we had a discussion about where we wanted to be. And Downtown offered us so many options: We have staff who bike to work, we have bus and rail transit here, and certainly, you can drive.”

That thought process allowed the firm to put its money where its mouth was, so to speak, and the company that provides transit solutions moved into its new Congress Street home, creating multiple mobility options for its 18 employees and clients. Two of them live in Montrose and do, indeed, bike into work. Two more commented that they enjoy being able to walk out the front door and down the street for lunch at any of the Market Square eateries.

“There’s an amazing energy Downtown,” said Eleni Pappas, one of TEI’s senior associates, who’s done work on neighborhood traffic management programs. “If I work late on a Thursday night, I’ll come out into Market Square and see people at the bars and restaurants – it’s fun.”

Being Downtown might not have changed the mission of the company, but it’s certainly made TEI an organization that is living its commitment. Its offices are decorated with one-way signs and a traffic light. Bikes lean against the walls in various offices. Its website touts the Downtown move, proudly proclaiming the new office’s 93 Walk Score, 96 Transit Score and 85 Bike Score and showing a map of its central location. “Come see us!” the site proclaims, clearly demonstrating that no matter where clients or potential partners might be, it’s easy to find a route to TEI’s door.

And, indeed, TEI is at the center of transit action in the city right now. The company was a major player in helping METRO redesign and reroute its buses; the new routes went into effect in August. That Herculean feat involved not only remapping the way buses moved through the entire city, but also called for a re-evaluation of what a transportation system should be. It’s almost difficult to grasp the sheer magnitude of the new METRO plan, but consider this: Robin Holzer, who handles marketing and business development for TEI says she’s fielded phone calls from as far away as China about what METRO’s done and how it will change the shape of Houston and the city core, and what it says about the city’s attitudes about traffic congestion.

“Congestion is a sign of success,” said Carleton. “It says that lots of people want to be here. So, our challenge is, how do we create a desirable, sustainable city, and what tools do you use to manage that? Just widening a roadway isn’t enough.”

That’s why TEI is also involved in creating smart streets in Downtown and around the city. Smart streets incorporate spaces for cars, bikes, buses and pedestrians to co-exist. TEI’s offices have maps of Houston tacked up onto the walls and laid out on tables in the breakroom, showing roads, streets and bike paths, all of the drawings and plans giving a glimpse at how to improve mobility in the city. Downtown’s new bike paths are part of that plan. So are the bike lanes that are part of the Bayou Greenways project, which looks to connect paths along Houston’s bayous, offering places for bike transit and recreation, as well as creating greenspaces for residents to enjoy.

“The Bayou Greenways project changed the experience of biking in this city,” said Carleton. “It’s a little bit like the success of METRORail. People see other people riding the train, or see that their neighbors can bike to their offices and they start to think, ‘Why can’t I do that?’ or ‘I want that in my neighborhood?’ The psychology of how people look at transit is changing everywhere. So, we can’t think anymore that we can only design a city around the car.”

The idea of transformation looms large for TEI – both in terms of helping clients reach their peak in providing great transit and quality-of-life solutions, but also in holding itself to a standard of not just talking about solutions, but taking part in them on an individual level as well.

“In a lot of ways, we lead by example,” said Pappas. “I do bike to work, but I I recently rode the bus with a friend of mine to help her figure out the best route and schedule. When people see that there are choices and they’re easy to use, it changes how they think.”

And change is definitely something that’s come – and continues to happen in – Downtown. Over the last few years, the city core has changed from the place where Houston does business to a place where Houstonians live, work and play. Traffic Engineering, Inc. capitalizes on that from its new spot, and incorporates the city core’s changing needs and demographics into what was already a solution-driven, forward-thinking, multi-platform mission.

“Downtown is the economic engine of most cities,” said Brad Eaves, who handles many of TEI’s traffic impact studies and helps develop traffic signal designs. “We used to design Downtown for workers. But now, we have to look at how we design Downtowns for other people, too. People want to live and work in Downtown Houston. And the value of land here means we’re seeing people redesign what used to be parking lots as multi-use developments. So, how do we find the right balance to make Downtown work for residents and those who work here? Downtown is now a destination. 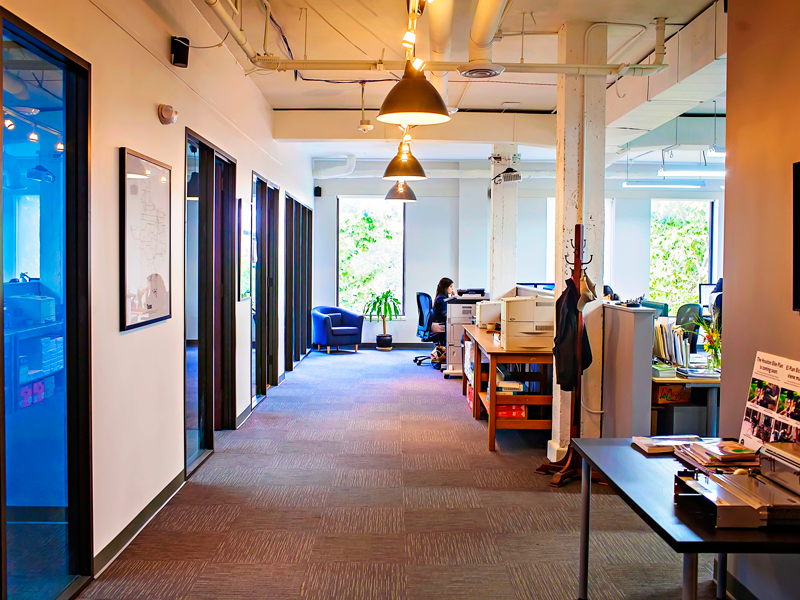 “We’re really about making communities better,” said Holzer. “And we go out of our way to recruit people who share in that mission.”

Through a combination of engineering savvy, project planning and a deft touch for listening to the community, the team at TEI has managed to help the fourth-largest city in the country emerge as a transit solutions leader. The oldest firm of its kind in the country, TEI has watched the growth of cities and transportation challenges for nearly half a century. As Houston and cities around the globe react to changing demographics, growth in urban density and a migration back to city cores, the firm is poised to help them find ways to move people and vehicles in and out of the areas where they live, work and play. And Downtown definitely gives the firm a front-row seat to watch how their solutions are taking shape. The new bicycle master plan would better connect the trails along the bayous into the street network. Downtown’s already walkable, and will likely see even more pedestrians on the sidewalks as more people choose to live in the city center.

“There’s so much life here in Downtown,” said Eaves.

“We’re spoiled,” jokes Pappas about TEI’s Downtown address. “In addition to the restaurants and bars we have right outside our office door, I can actually walk, bike, bus or drive to work. That’s a great choice to have.”

And choice, the TEI team agree, is what building smart, 21st-century transportations solutions is all about.

“When we help create solutions like the new METRO routes or advise on bikeways, what we’re saying is, not everyone has to drive if they don’t want to – but people still can,” said Carleton. “But giving people choices is another way of having freedom. And when you’re in Downtown, you see people making those choices every day.”