Small businesses are the heart & soul of #DowntownHouston. We encourage you to continue supporting local. Click here to see a list of restaurants ready to serve you. #houstonstrong
Print
Share
0
Feature
Past Meets Future
Photo: dabfoto

There’s a buzz at 708 Main Street. It’s not just the constant whoosh and whistle of the METRORail as it glides through Downtown. It’s not just the click of heels on the pavement as Downtown office workers hurry to meetings, lunches or work. No, it’s a different sort of energy, one that says a new way to work is here, one that’s nimble, customizable. It’s an energy whose innovation and individual solutions are drivers for success. It’s an energy that further cements Houston’s status as a 21st century workplace.

And it’s all happening at WeWork.

WeWork, a global office and work solution space, opened in April, taking over the Great Jones Building on the corner of Main and Capitol streets. The organization offers tailor-made office environments for companies ranging from one person to more than 1,000. More than just another co-working space, WeWork provides options that range from an open seat for someone to set up a laptop to office space that can accommodate a company’s headquarters.

With offices around the globe, WeWork strives to be a flexible partner for an ever-changing work scene. The Downtown location is its second in Houston (the other is in the Galleria area), and general manager of the Texas market, Nathan Lenahan, thinks the location is ideal for what his company provides. 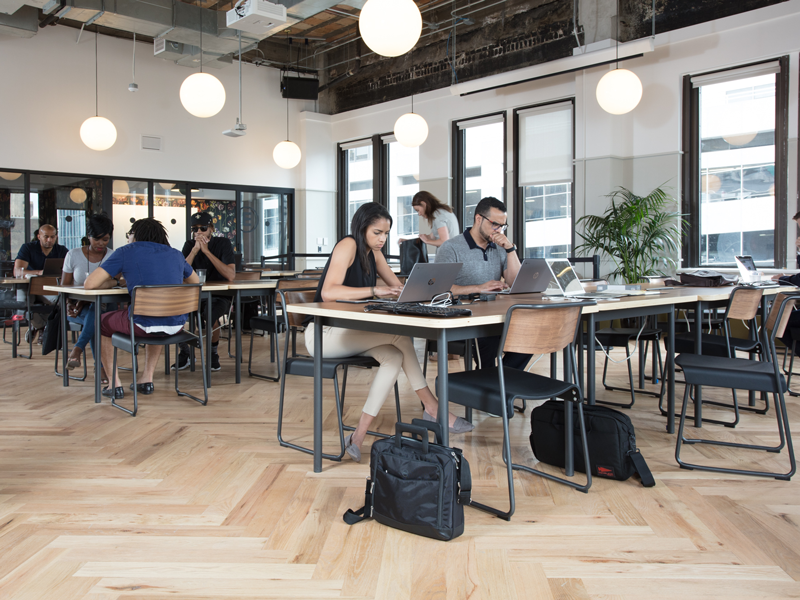 “We are so excited to be Downtown,” he says. “Innovation and creativity are coming alive in Houston’s Downtown, and WeWork will help accelerate that. This is the perfect place for us to be because it captures the incredibly diverse workforce that makes Houston such a special city."

WeWork’s concept is simple: members rent office spaces to suit their needs. People can buy a membership that allows for access to any open desk in WeWork’s common areas or one that provides a dedicated desk. Private offices of various sizes are available as well, tailored to whatever a company’s needs might be. WeWork provides furniture; printing, copying and scanning services; lightening fast Internet; conference and meeting rooms; and handles all of the property management for the space, leaving companies free to conduct business without worrying about the details of running a facility. In addition, WeWork provides fruit water, coffee and snack services on all of its floors, meaning members have endless access to hot joe and munchies like power bars. The organization also offers an array of membership events, including everything from discussions about growing your business to exercise classes. Oh, and it’s dog friendly.

“Companies have come in and hosted lunches,” says WeWork member Andy Codner, enterprise account executive with MongoDB (see sidebar). “There was yoga the other day. It’s a great way to give members a chance to blow off some steam.”

“There’s no typical WeWork member,” says Lenahan. “But there’s also no longer a typical company. We have people who are one-person operations and we have people who have 1,000 employees. We pride ourselves on being flexible and agile. But the big consistent we see is that our members are looking to be part of something bigger than themselves.” 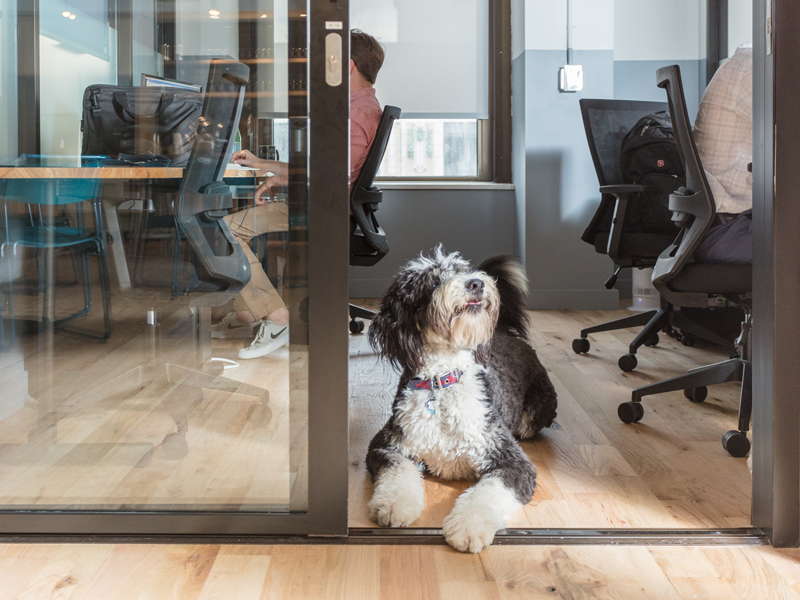 Creating that kind of a community is a hallmark of WeWork. At 708 Main, corridors are small and common areas are vast, the idea being to provide moments of spontaneous interaction. Members have the opportunity to network, just by showing up to the office every day, since so many different companies are housed in the WeWork space. Memberships are also made to travel, meaning members can go into any of WeWork’s more than 200 locations around the globe.

Walking through the Great Jones Building, it’s hard not to be struck by the way the building also lends itself to WeWork’s mantras of business solutions and community. The 10th floor common room has striking views of Downtown, and its blonde wood floors and exposed concrete beams provide unique architectural details, and the original windows flood the area with natural light, creating an inviting space where, at 2:30 on a recent Friday, members were chatting with each other at the u-shaped bar and browsing the bookshelves. Each floor is a blend of offices and common spaces, whether they’re small booths or big communal tables. Glass-enclosed offices house one desk or five or a combination of desks and private meetings spaces. Conference rooms of varying size provide gathering spots for meetings, with video capability and ample white boards to toss around ideas. It’s meant to be the kind of place where people want to come to work.

And if location is everything in real estate, WeWork has it made. It’s on the light rail line and is easily accessible by both walking and bicycle. Multiple parking options surround the building for commuters who prefer to drive. As this section of Main Street is further enhanced, it’s easy to see this as an ever-growing hub of mixed-use activity with a diverse array of offices, hotels, bars and restaurants.

“Downtown is really the heart of the city,” says Lenahan. “It’s got so much vibrance. We’ve been impressed with the area, how much is happening here. It has the density we want and we love being in an urban core.” 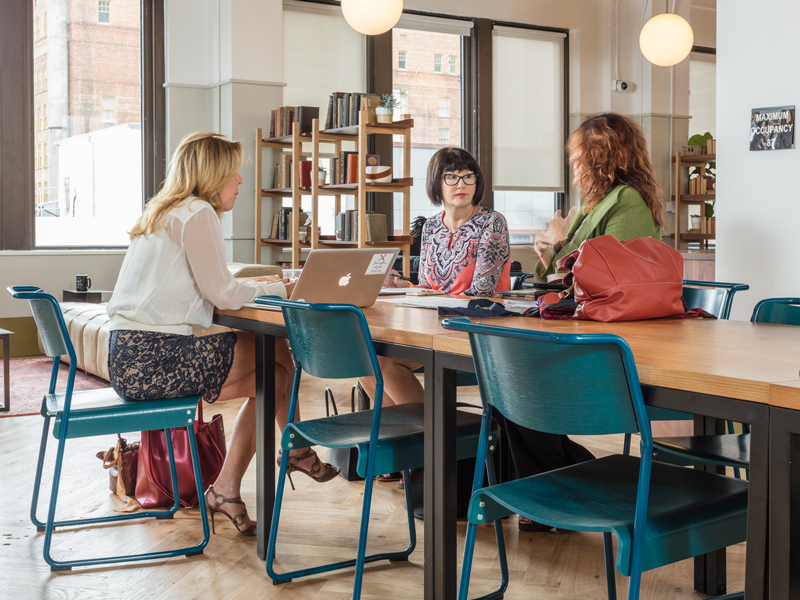 Downtown’s WeWork location has somewhere in the neighborhood of 1,400 members and is looking to grow. The company is betting its combination of Downtown location and personal touch for members will be a selling point. Members say they’ve already reaped the rewards.

“I love coming to work here,” says Brent Nelson, district fundraising manager for WAYS Fundraising USA (see sidebar). “The amenities are great. The staff takes care of everything. People here have made me feel like friends and part of the family. WeWork has really created a happy environment for everyone.”