There’s been a quiet movement sweeping Downtown Houston, and in its wake are some of the city’s most memorable and engaging spaces. It’s called “placemaking,” and though it’s still up for debate just exactly what that entails, there’s no debate as to its success.

Discovery Green is the easiest illustration of placemaking, and what it can mean for a community. Celebrating its 10th anniversary, the park is a hallmark of Downtown, a crown jewel that extends far beyond a place to enjoy the outdoors on a lazy Sunday.

It’s not just a park. It’s an experience all its own. It’s a catalytic space that’s transformed everything around it. It’s an investment in the future. It’s a place to enjoy today. It’s a place where many have made memories spanning the last decade.

It’s not just a park.

And that’s exactly the point of placemaking. To intentionally imbue an area with an identity that reflects its immediate surroundings. Intentional is the key word here, with projects that are visionary, thoughtful, carefully designed, community driven and that have plans for ongoing investment. 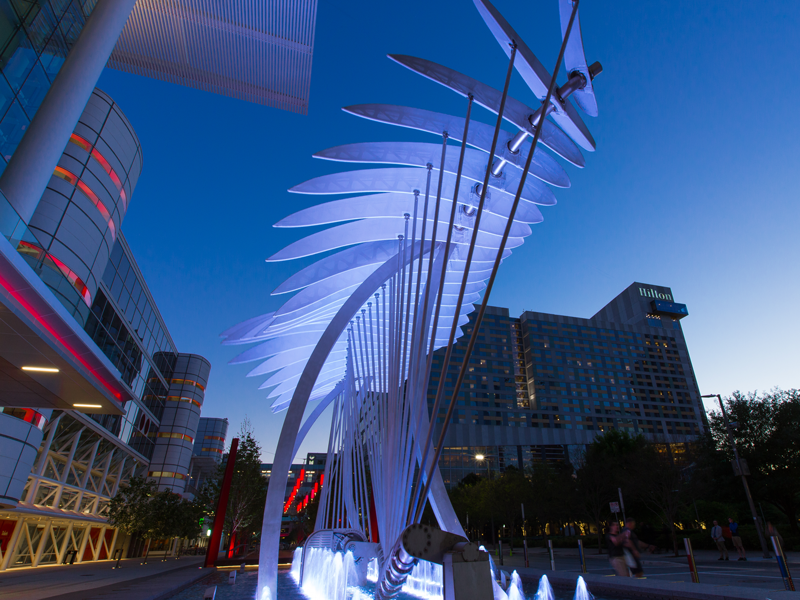 Before there’s a place to make, there’s a vision that it needs to exist. For Avenida Houston, it started as an exploration of ways to raise the profile of the city to attract more conventions.

A commissioned study led to recommendations for more hotel rooms within walking distance of the George R. Brown Convention Center and improving the aspects of livability and experiences in the surrounding area. The first half culminated in the Marquis Marriott (the Hilton of the Americas was already in existence at the time the results were published) while the second half led to further development of the Avenida.

Part of the vision was to weave existing assets like Discovery Green into the fabric of the Convention Center, connecting seamlessly and providing visitors broader access and experiences than ever before.

“Discovery Green was around at that time, and was a great front door, but with eight to nine lanes of traffic in between, it wasn’t really accessible, and even if it was, it didn’t appear to be,” says Brenda Bazan, president and CEO at Houston First.

That eight lanes of traffic has since been reduced to a two-lane, one-way street, which expanded walkability and empowered pedestrians on the Avenida, bringing the public spaces between the George R. Brown Convention Center and its surroundings much closer together.

Additional economic development in the way of restaurants and retail, plus a growing program of events, added to the well-rounded endeavor meant as a cohesive effort to bring people, places and experiences together. 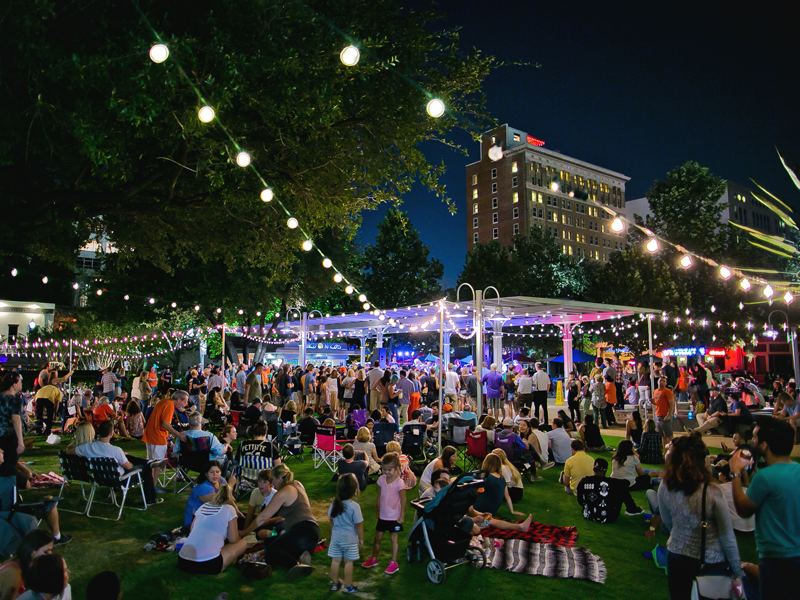 Power to the People

Phil Myrick is the director of planning & placemaking services at MIG and was a key player in helping craft the vision for both Discovery Green and Market Square Park in Downtown Houston. He’s a facilitator in extracting ideas, concepts and priorities from local communities and injecting them into the design and revitalization of spaces.

“A lot of the idea of placemaking is that there’s heavy citizen engagement and many times, there’s an activism to it,” says Myrick.

Empowering the stakeholders, residents and businesses closest to the space is paramount, because they are most affected by the success or failure of these projects.

“Essentially, it’s trying to flip the approach from project- or design-based, to be a more community-based conversation,” says Myrick. “The goal is to create an engaging space where they feel like they belong to it. These are spaces clustered in a way that can create a social buzz or hub. To get to that point, it’s very important that the community members are a part of the process.”

Myrick explains that the first step in that process is downshifting to “listening mode,” talking to businesses, property owners and residents in an attempt to understand attitudes, history, major issues and challenges. Next up: Getting people in the actual space, followed by public workshops, focus groups and again, more listening.

Myrick explains, “When we put people to work in small groups in a public workshop setting, people feel empowered and take it seriously and come up with a sophisticated understanding of the issues.”

All of the input is then carefully gathered, curated and turned into a vision for the space, complete with a checklist of “should haves.” For example, Market Square Park’s list included a dog run, a cafe, a flexible lawn and public art, all of which made the final cut.

There’s another round of public comment on those “should haves” and concepts, which is honed to its final state in the form of a report and diagram of the best ways to organize the suggested elements. Then, it’s off to the design team to bring the vision into reality.

It’s a true democratic process, building on consensus, culminating in something for and by the community it was created to serve. (Congress might learn a thing or two from this process.)

Though it’s one element of many in the placemaking strategy, art brings a space to life like nothing else can, and has been transformative in the evolution of Downtown.

“Community development, engaging audiences, bringing in visitors, quality of life, the arts are absolutely a winning strategy for success,” says Deborah McNulty, director of the Mayor’s Office of Cultural Affairs.

And she’s amazed and delighted at the support for both permanent and temporary art installations throughout Downtown and Houston as a whole.

“In the city of Houston, you don’t have to talk anyone into an art project. Our biggest challenge is meeting the demand of people wanting to see more and have more opportunities,” says McNulty. “No office of cultural affairs can replace the drive of a lot of individuals wanting to make their city better.”

McNulty finds that gatekeeping here is at a minimum, which helps facilitate more art in more places, resulting in a vibrant, more engaged community. It also happens to foster a sense of pride and shapes identity in a way that only art can.

“The more artwork that you see, the more your brain is alive, and reacting and engaged in the world around you,” says McNulty. “I think people really crave it. So many great things about the arts is this opportunity to bring people together and have a shared experience.” 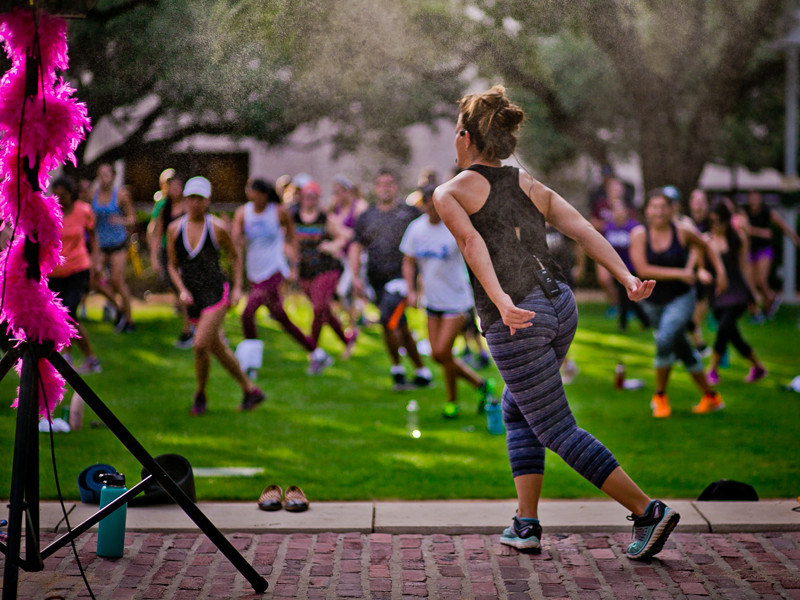 Art is one thing to keep the community coming back to a space, as are elements like cafes, dog parks, walking trails and more, but consistent event programming is another vital strategy in the placemaking playbook.

It’s hard to believe after many years of hosting some of Downtown’s most memorable events, but “event space” wasn’t originally in the plan for Market Square Park.

“We opened up the park without a plan in place for events. But we had this huge grand opening shindig and it was such a special day, the park came alive with the energy of those involved – neighbors, business owners, organizations, city representatives and more. There was so much ownership of this space, people were really invested in its success,” says Angie Bertinot, director of marketing and communications for Downtown District. “The minute we finished the grand opening, we thought, ‘We have to do more of this.’ ”

The energy and vitality events can bring to a space are only as good as the planning that goes into them. And Bertinot knew she had an obligation to the local residents and businesses in executing a program that fell within the unique context of the historic neighborhood.

When soliciting feedback on what types of events to host in the park, she found that residents wanted them, but not too many; wanted them to be smaller in size and scope and wanted to ensure public access was never prohibitive. With that in mind, she transformed the events calendar to what it is today.

“In addition to attending an event or having lunch at Niko Niko’s at the park, we hope that ultimately folks will wander beyond the park boundaries and experience the entire neighborhood,” says Bertinot. “We’re always cognizant of the businesses around the park. How can we support and involve the businesses through our programming?”

In keeping with that framework, the events at Market Square Park have been going strong for the last eight years, with the Backyard Jams Concert Series, movie nights, Blanket Bingo, Body by Broadway exercise classes, pub crawls and so much more. 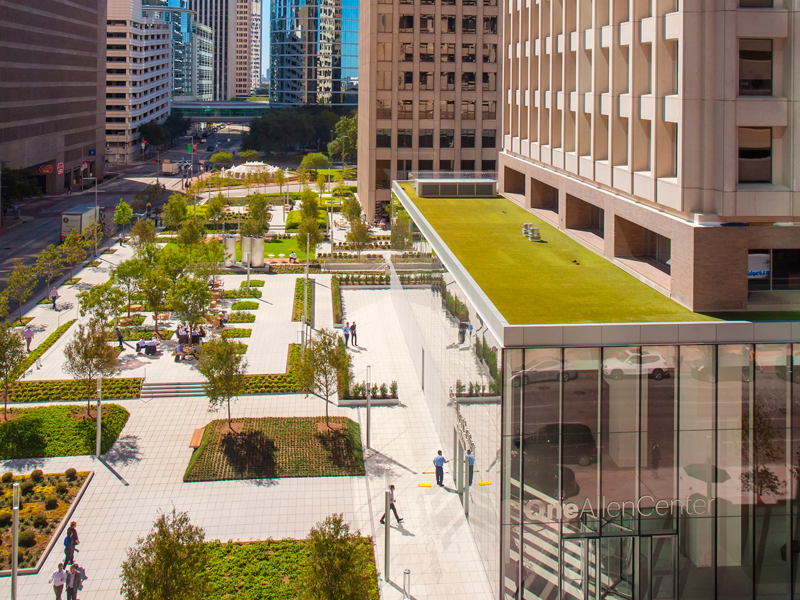 The inspiration for the Acre came from looking at the success Brookfield has had in other markets with placemaking,” says Travis Overall, executive vice president and head of the company’s Texas region. “To us, placemaking usually involves a mixed-use type of environment, office retail, sometimes multi-family and also involves amenities. We saw that around the world at some of the other Brookfield properties and wanted to bring that to Houston.”

In addition to creating a greener, more open space for tenants to enjoy, it was also a design-motivated decision to make Allen Center more intuitive and welcoming from the outside.

“It was really a very closed, uninviting environment, until you got in,” says Overall. “We decided to open things up and by doing that, we were able to tear down a sky bridge, reconfigure the landscaping, shuffle the retail tenants around and create better lobby space to really start the makings of what we think is a true quality mixed-use development.”

Some of that landscaping included planting 171 trees on the Acre, which increases shade, and the opportunity for visitors to find shelter from Houston’s hot summer months. Under those trees, and inside the space itself, Brookfield has big plans to keep the Acre filled with activity and purpose.

“We want to create an amenity for our tenants that allows them to get out of their office a little more and have new experiences from their office environment or their hotel,” says Overall.

There will be tenant-only events like concerts, happy hours and fitness classes, but it was also designed with the general public in mind. The park is “open to everybody” and was designed to “appeal to all Houstonians,” which means that Brookfield won’t be the only one profiting from its success.

Placemaking Into The Future

As Downtown Houston continues to blossom, placemaking is more important than ever. Here are some big projects on the horizon.

A park is slated to launch in 2020 on a lot bordered by San Jacinto, Fannin, Bell and Leeland Streets is part of the Downtown Living Initiative and Plan Downtown, with the intent to help shape and activate this region of Downtown. Community outreach will be the start of placemaking efforts, with park construction estimated to begin in 2019. Downtown Redevelopment Authority will oversee the process and maintain the park, similar to their involvement with Market Square Park.

Also on the 2020 timeline is the redevelopment of Jones Plaza in the heart of Houston’s Theater District. Spearheaded by Houston First through a partnership with Downtown Redevelopment Authority, City of Houston, Jim and Whitney Crane and the 2017 World Champion Astros’ Foundation the plan is to “revitalize the plaza into a vibrant public square for all visitors.”

The ultimate vision is a “programmable venue that can be used both day and night, reflecting its surrounding performing arts community.”