Print
Share
0
Three Staircases, One Rooftop, a Performance Venue and ENDLESS OPPORTUNITIES
An Inside Look At POST Houston

POST is multifaceted. And that singular adjective only scratches the surface when
it comes to the 16-acre Lovett Commercial adaptive reuse project at 401 Franklin currently in development.

It’s natural to wonder how the former Barbara Jordan Post Office's massive space will be transformed, and what the long awaited project will bring to the City of Houston.

While one place can’t be all things to all people, POST comes pretty close. For those who want to work, play, eat, immerse themselves in art, listen to a concert, host a private event, or simply enjoy a view of Downtown from a rooftop park, the multiple spaces within POST promise to be something that our city has never seen before.

POST will open to the public in phases beginning this fall. In these pages, we invite you to explore the possibilities POST brings to Downtown. No hard hats required.

It’s a warm summer afternoon and little beads of sweat begin to form on our foreheads underneath our hard hats. Nine of us gather around Kirby Liu, Lovett Commercial’s director of development, to begin an official tour of POST.

“It’s not a beautiful building in a traditional sense,” says Liu. “We think of this as [a part of] history. We can’t do much on the outside, but what that allowed us to do was to go extreme and radical on the inside.”

We’re a motley crew of writers, potential tenants and friends of POST, ready to ooh and ahh at the transformation underway inside the former Barbara Jordan Post Office. The discomfort of scalp perspiration is a reasonable price to pay for a peek into the inner world of POST’s design chrysalis, as we soon find out.

“No part of this project is undesigned,” says Liu, gesturing to one of the three great atriums located inside. “It’s supposed to hit you in the face.”

We begin by gawking up at a wooden staircase that zigzags in the shape of a Z, still under construction, but also majestic in its unfinished form. We walk underneath, clearing the stairs completely, before the realization that there are no supports below. Instead, the stairs are suspended from the ceiling, like a piece of hanging art waiting to surprise and delight careful observers. 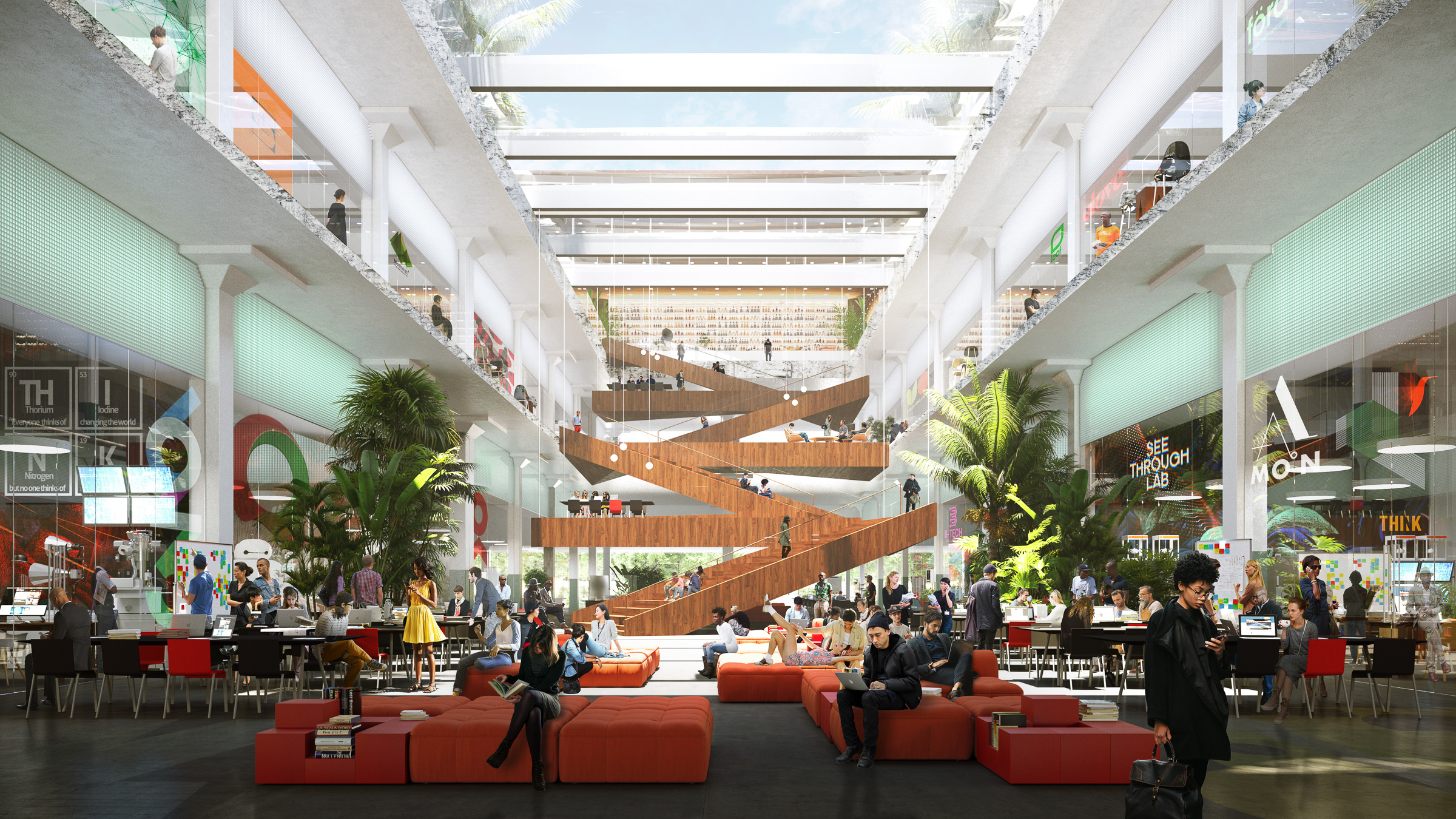 The suspensions hang from a ceiling of blue sky dotted with wispy white clouds. It’s not a design trick; it’s the literal sky, viewable through a roof made of two thin plastic sheets. Described as “basically a Ziploc bag,” the ceiling allows plenty of natural light into the building, lowers the carbon footprint and uses one of the most economical insulation materials available—a layer of air between the plastic. The staircase vertically connects three stories where soon there will be startups collaborating in an open coworking
space, plus plenty of room for more traditional office setups.

We move into a new area, carefully dodging construction equipment, following our tour guide, absorbing the sounds of buzzing, clanging and droning from all sides. Greeted by a spiraling shiny metal staircase studded with vertical wands of light, this new feature stands out in contrast between the wooden warmth of the last space and the modern edge on display in the 53,000-square-foot POST Market. 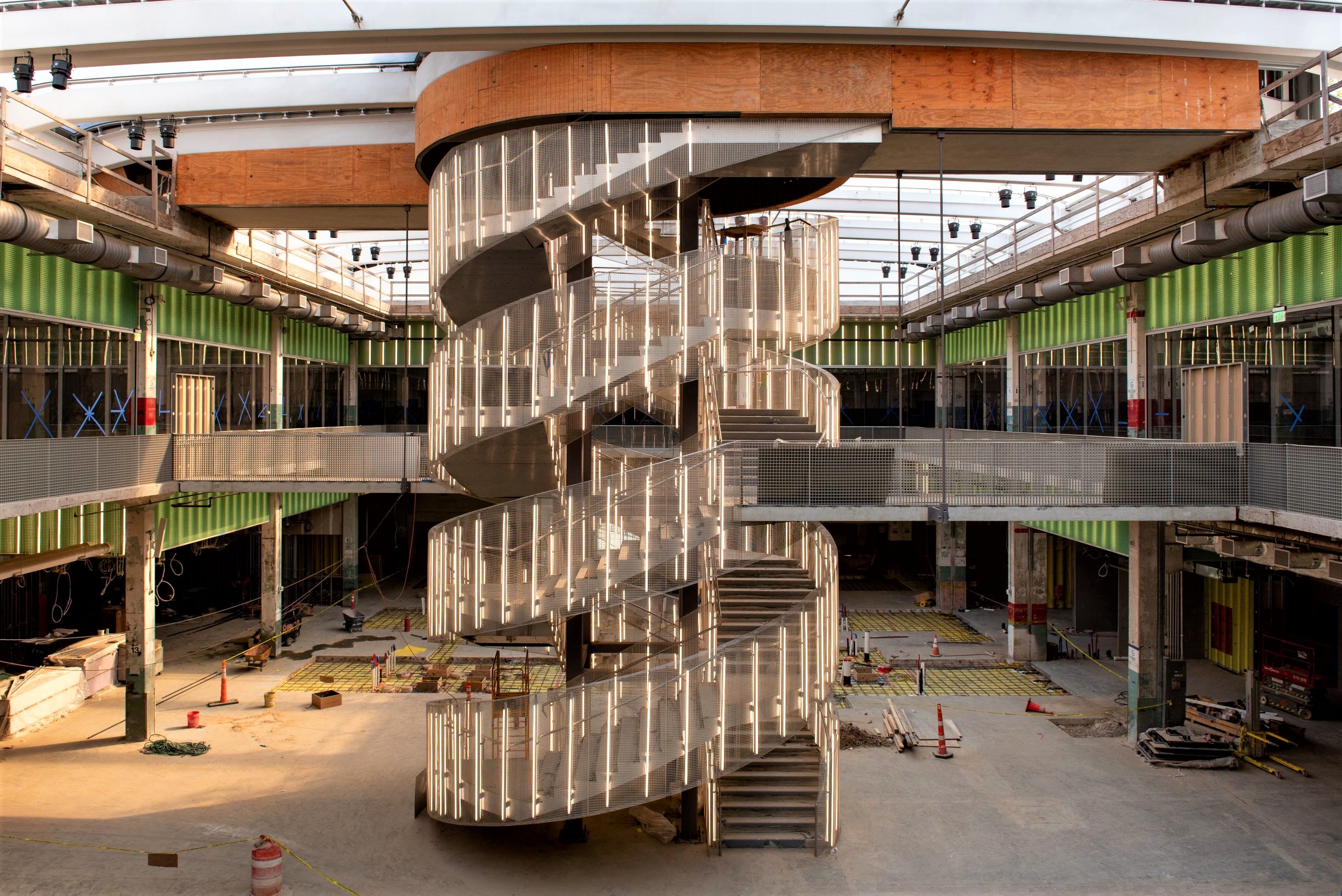 Blade Runner-esque, the design was informed by Liu’s time in Asia. Stainless steel cages top the kiosks where food vendors will be stationed, delivering an assortment of global and fusion cuisines. Neon signs will be attached to these cages adding to the electric, night-market vibes. Outdoor seating along the former loading dock will feature canvases reserved for street artists.

Liu rattles off a handful of confirmed vendors, bringing flavors from all over the world with them. Many hail from Houston, while others
will make their Texas or American debut in this space. There’s an intentional blend of familiar and unfamiliar, comfort and cutting edge, some of what’s expected and some of what’s meant to be explored.

An atrium away—one that feels like yet another universe—the blue skies above the plastic-sheet ceiling once again welcome us. Two ascending X-shaped staircases mark the spot, as if we’re in a real-life treasure map. They provide a backdrop to the mix of retail and experiential art that will blend here. “Virtual reality,” “human experience storytelling,” and “immersion” are a few descriptors used to hint at the options soon to be unveiled. 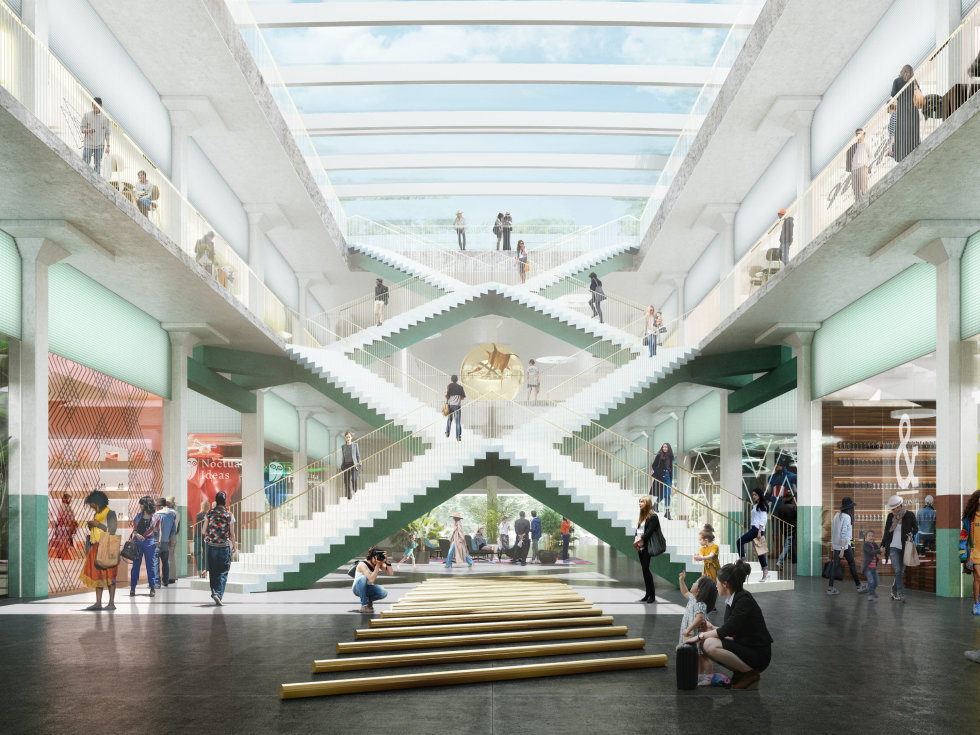 “In 2015, when we bought this site, it was an empty, cavernous nothing and then the oil crash came and we thought, what do we do with this space?” says Liu. “So we had the [Day for Night] music festivals there. We sort of built this identity as a cult art and music space. That still remains the DNA of our project.”

Two final pieces of this multiverse remain, and now we’re on our way up to the roof. As
we ascend, we learn that staircases are design centerpieces in each section intended to pay homage to POST’s hallmark, the Skylawn. Aside from the symbolic nod to the top, they also serve additional purposes.

“If you’d seen it before, it was an infinite field of black columns,” says Liu. “No one knew where you were in the building because you’d get lost so easily. So the three rooms are giant halls with giant staircases that make it easy to navigate. Obviously [they help with] circulation [of the building] as well as giving that sculptural placemaking to each of those spaces.”

A big reveal awaits as we crest the building, sharply inhaling at the view on the top as well as the view from the top.

There are trees. Mature trees. On top of a building. A five-acre park featuring seven different gardens. Space for two restaurants. An event space for 300 guests with a giant projector wall. A panoramic view of Downtown’s skyline. A winding trail through it all. Skylights. Quiet alcoves around each corner. Cacti. Azaleas. A performance lawn. It is as magnificent in person as it looks from I-45, even in its incomplete form. 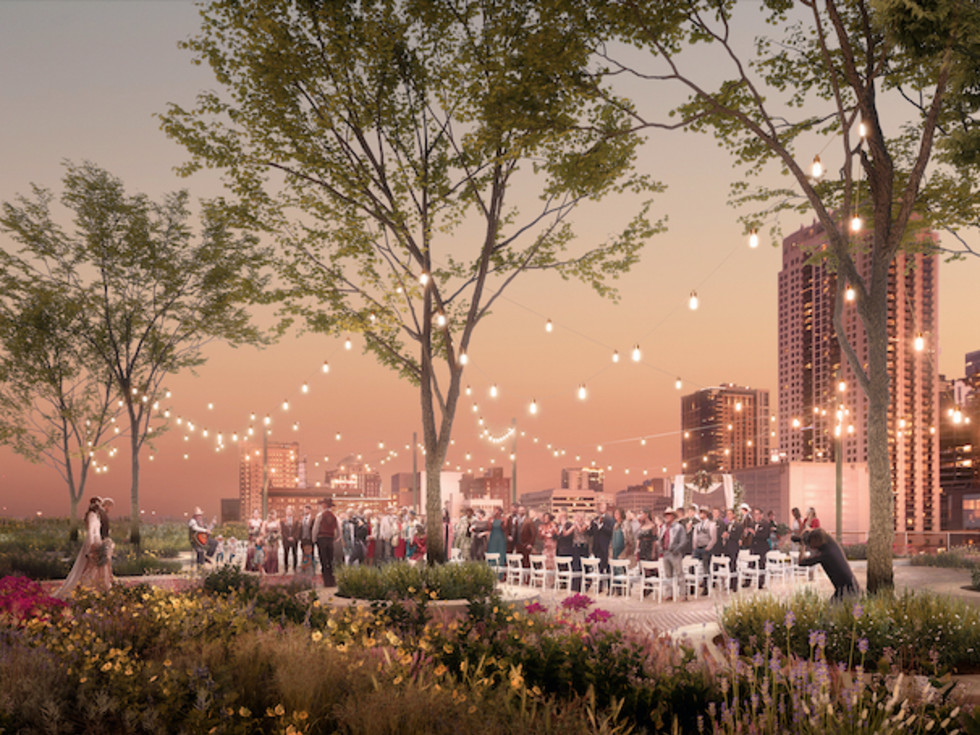 After a few rooftop selfies, we’re all actively perspiring by now, our shirts sticking to the smalls of our backs. We descend back into the belly of POST, heading for the final leg of the tour. Entering 713 Music Hall, POST’s 5,000-capacity performance venue, we learn that when finished, it will be the largest non- arena Live Nation venue in the city of Houston. 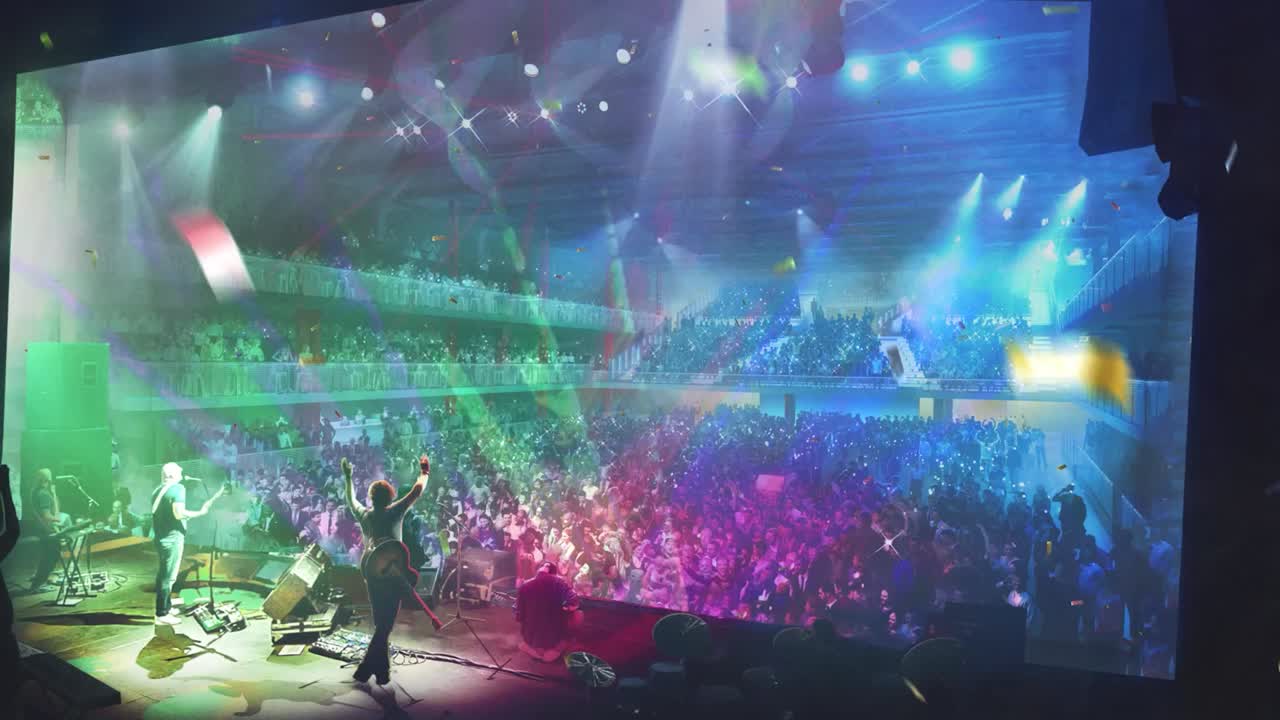 Inspired in part by German nightclubs, materials like leather and repurposed spacesuit materials from NASA will adorn the walls here. The hall itself will feature three layers of seating with hidden bars and lounges embedded throughout; places to hide away and recalibrate. Compared to “sitting under the bleachers at a football game,” these pockets of space will open opportunities for a multitude of experiences for a multitude of audiences.

Winding down the tour, we come full circle, returning our hard hats and bright-orange safety vests, downing water and welcoming the air conditioning of the construction trailer. For now our glimpse is over, but we’ll continue observing the metamorphosis of POST as it unfolds layer by layer.