Small businesses are the heart & soul of #DowntownHouston. We encourage you to continue supporting local. Click here to see a list of restaurants ready to serve you. #houstonstrong
Print
Share
0
Plate
Tree-Cle Down Economics
Photo: Morris Malakoff

When New York real estate speculators John and Augustus Allen purchased the 6,642 acres on the banks of Buffalo Bayou just months after Texas won independence from Mexico in 1836, they certainly couldn’t have imagined what their mosquito infested swampland would look like almost 200 years later. Treebeards founders Dan Tidwell and Jamie Mize can relate. When the intrepid duo opened a modest lunch café next door to a peep show arcade on Preston Street, not even Downtown’s head cheerleader, Bob Eury, could have predicted how the neighborhood would look 40 years later.

Surrounded by mostly abandoned commercial buildings whose tenants had long since fled to greener pastures, the formerly bustling Market Square Park had gradually fallen into disrepair as the retail landscape shifted from Downtown to Uptown in the ‘60s and ‘70s. Undeterred by the seemingly bleak conditions, Tidwell and Mize saw something where there was little to see, and a future Downtown institution was born.

Treebeards – a pillar of Southern cuisine with humble beginnings and momentous growth brought on by legions of early adopters – made its Downtown debut in 1978 as a 30-seat café in a former pool hall serving primarily sandwiches and salads with a few Cajun specialties. The concept quickly morphed into Downtown’s go-to lunch destination as nearby lawyers, judges, and office workers formed daily lines out the door.

The underserved Market Square corridor had an overnight hit on its hands, and Treebeards would outgrow its original location in just two years. “Downtown Houston has evolved immeasurably since the late 1970s,” Tidwell says. “At that time, Market Square was completely neglected. There were very few places to grab quality food, and I saw a unique opportunity to open a restaurant. I had faith that the area would morph into what it is today – albeit at a slightly faster pace.”

A hidden gem no more, Treebeards left its Preston Street home in 1980 for an expanded location around the corner in the Baker Travis Building at Market Square – the second oldest building in Houston – where a Day-Glo-infused nightclub with a Go-Go stage reigned supreme at night on the floor directly above the restaurant. By then the dishes had evolved as well, as more Southern and Gulf Coast fare, such as red beans and rice topped with shredded cheddar cheese and green onions, Shrimp etouffee, jambalaya, chicken fried chicken, fresh vegetables, and homemade cakes and pies, had come to define the menu.

With its new and bigger home and regular write-ups in the Houston Chronicle, the restaurant’s second iteration soon attracted lunch goers from all over the city who were curious to see what all the fuss was about. “They needed things to write about just like I needed the customers,” remembers Tidwell, “The editor would call up saying he needed a food shot for this or an interior pic for that, and we were more than happy to oblige him.”

Without any aspirations for a second location, Treebeards organically entered into a partnership with the dean of clergy at Christ Church Cathedral, which was making progressive programming additions to the church in the form of a bookstore, classrooms, and a social hall featuring an art and lecture series. By 1981, Treebeards was managing food services in the church’s fellowship hall – The Cloister – on Texas Avenue, where the menu is still offered in the unique setting of the church’s social hall and connecting courtyard. 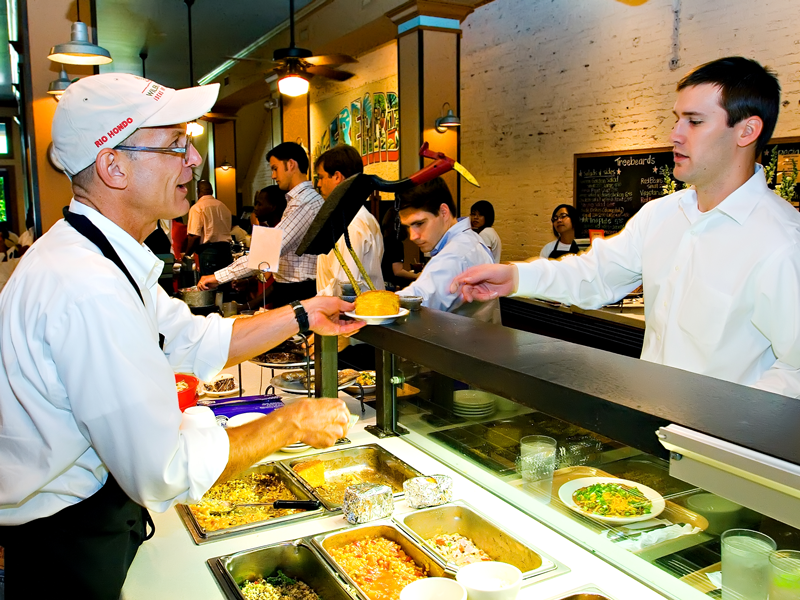 Since then, Treebeards has opened three more Downtown locations, including a third in the bustling tunnel system at 1100 Louisiana in 1990, another at The Shops at Houston Center in 2011, and a fifth outpost ensconced within Pennzoil Place a year later — providing its loyal fans with multiple avenues for both dine-in and takeaway options.

Tidwell and Mize sold Treebeards in 2010 to long-time employees Jolie Stinneford (and her husband Charles) and Matt Rowden. Stinneford’s deep connection with Treebeards took root more than 30 years ago when she returned to Houston following a brief stint at the Fontainebleau Hilton in Miami after graduating from the University of Houston’s Hilton College of Hotel and Restaurant Management. She returned just in time to launch the 1100 Louisiana restaurant, eventually becoming gGeneral manager of the company’s operations.

“I think we’ve done a great job making sure nobody even really knows there’s been a change in ownership,” Stinneford said. “People really love Treebeards and have loved it for 40 years, and we’re doing everything to make sure that love affair with the restaurant continues.”

In addition to dine-in and take-out lunch service, the restaurant also operates a full-service catering department for events of all kinds – from lunch meetings and private parties to bar mitzvahs and weddings. The Market Square flagship location boasts an expansive second floor event space that can accommodate up to 200 guests and an outdoor deck with bird’s eye views of Market Square Park.

In four decades, Downtown Houston has evolved in ways that have taken a century or more in older cities like New York, Chicago, and San Francisco. The neighborhood now serves as a nexus for dining, hospitality, entertainment, gathering spaces, and residential life along with the electricity that accompanies a fully formed urban core. Treebeards – the elder statesman of Downtown restaurants – has done its part in spreading the gospel (and the buttercake) every step of the way.