When you think of historic cities, Houston may not be the first that comes to mind. While the Bayou City may be thought of as a modern metropolis or a budding Silicon Valley of the south, it also has quite the storied past. Since its birth on Buffalo Bayou in 1836, Houston has grown to become one of the largest and most diverse cities in the country. Cruise through the streets of Downtown and you’ll discover the history that still exists in the neighborhood today, you just have to know where to look! Get an introduction to Houston’s story with a self-guided tour down Main Street. Don’t worry, we’ve got the route all mapped out for you.

Start your trip at the place where it all began, Allen’s Landing. Augustus and John Kirby Allen made their way up the bayou on August 30, 1836 and soon purchased roughly 6,600 acres of land. The Allen Brothers named the town in honor of the Republic of Texas’ then-president Sam Houston, then spread the word of their latest investment and the rest is history.

Climb up the steps and you’ll find yourself on the street that’s the heart of the city. Known for its abundance of bars and restaurants, Main Street serves as a window to Houston’s architectural past. Seemingly every style of architecture can be found here. From the Victorian features on the Sweeney, Coombs & Fredericks Building to the Italian Renaissance style of the Humble Oil Building, this street is one of the few spots that has maintained Houston’s history. 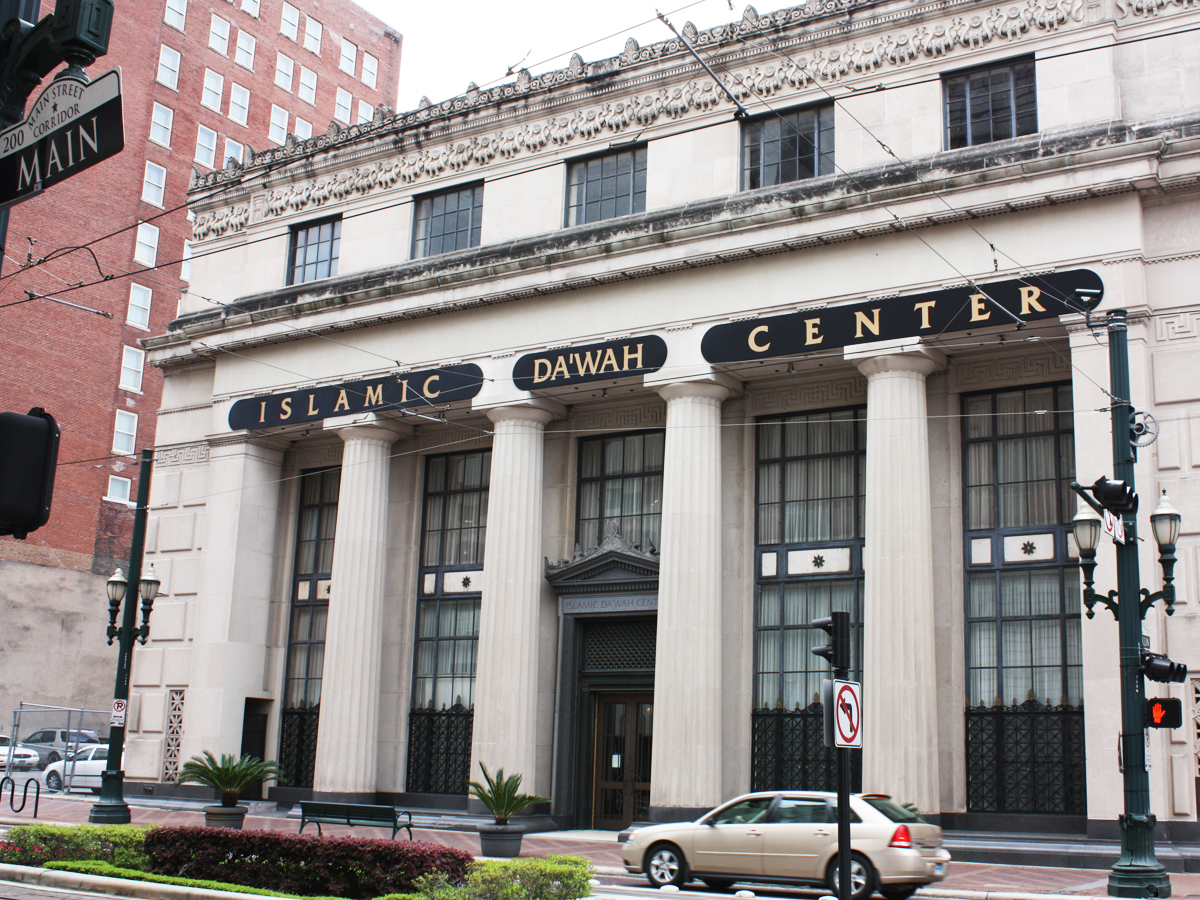 Located at 220 Main Street, the Islamic Da’Wah Center was once home to the Houston National Bank. Built by Hedrick and Gottleib Architects, the structure is complete with huge columns and cast-iron doors set with intricate detailing. Houston Rockets legend Hakeem Olajuwon bought the building in 1994, restored and converted it into what is now one of the nation’s leading centers for Islamic worship and culture. 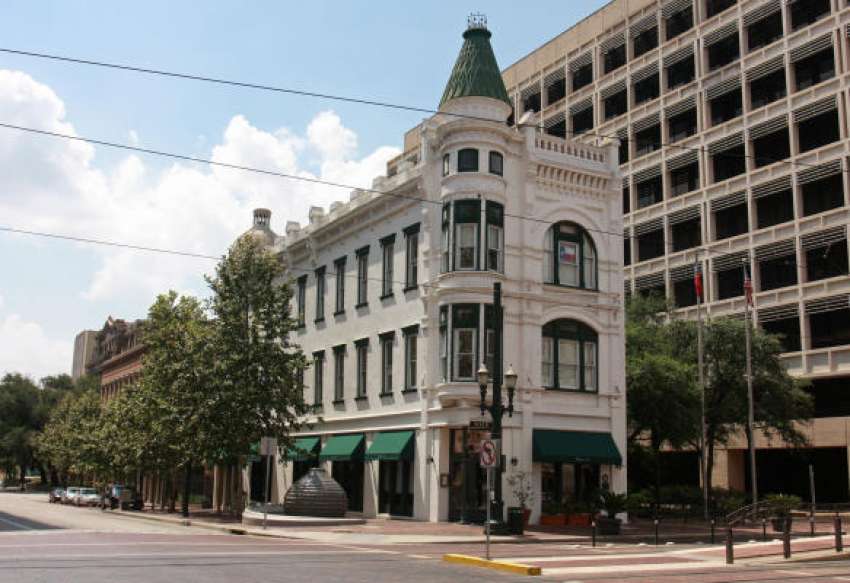 Travel a couple blocks down and you’ll end up across the street from the Sweeney, Coombs & Fredericks Building [301 Main]. Designed by George E. Dickey in 1889, the 131-year-old building is one of the few Victorian-style architectural structures remaining in Downtown Houston. Once home to the Sweeney and Coombs Jewelry firm, the building received a "City of Houston Landmark" designation in 2009. The space is now a go-to spot for a night of Latin dishes and dancing at Fabian’s Latin Flavors! 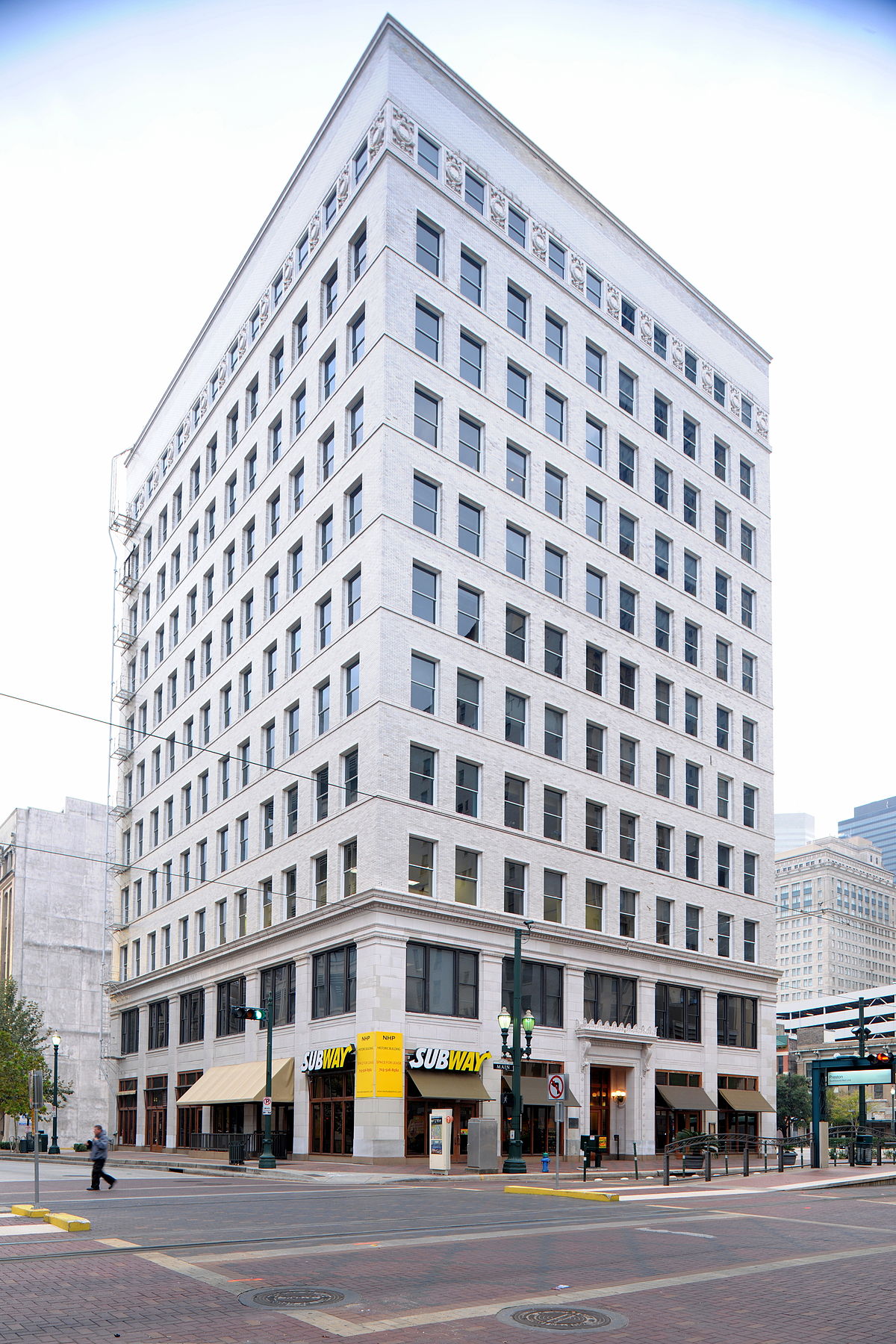 Next to Fabian’s lies the Scanlan Building [405 Main], an 11-story building designed by Chiago-based D.H. Burnham & Company. First envisioned by two-time mayor of Houston, Thomas Howe Scanlan, the building is situated on the site of the first official home of the president of the Republic of Texas. Though Howe died in 1906, before his vision came to life, his seven daughters built the building as a memorial to him. Stroll by the office today and you’ll see it’s now owned by workspace provider, Novel Coworking. 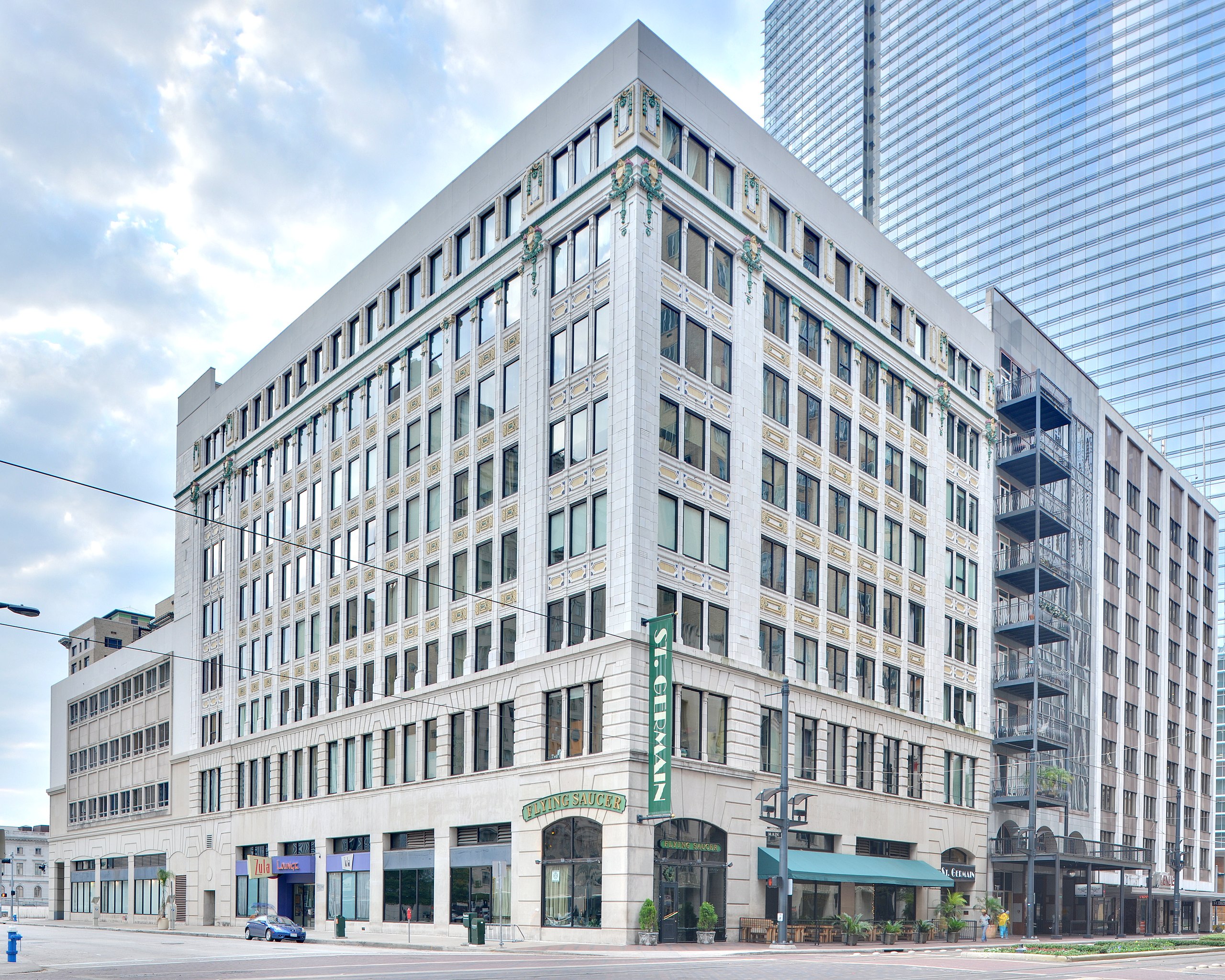 Head three blocks south and stop at the corner of Capitol and Main. You’ve arrived at the S.H. Kress and Co. Building! Located at 705 Main, the Kress Building is an eight-story structure covered almost entirely in terra-cotta. After its construction in 1913, the building was a hotspot for Houston shoppers in search of clothes and home goods. Listed on the National Register of Historic Places in October 2002, it now houses Flying Saucer and St. Germain Lofts & Condos, luxury loft condos that capture the essence of historic Houston. 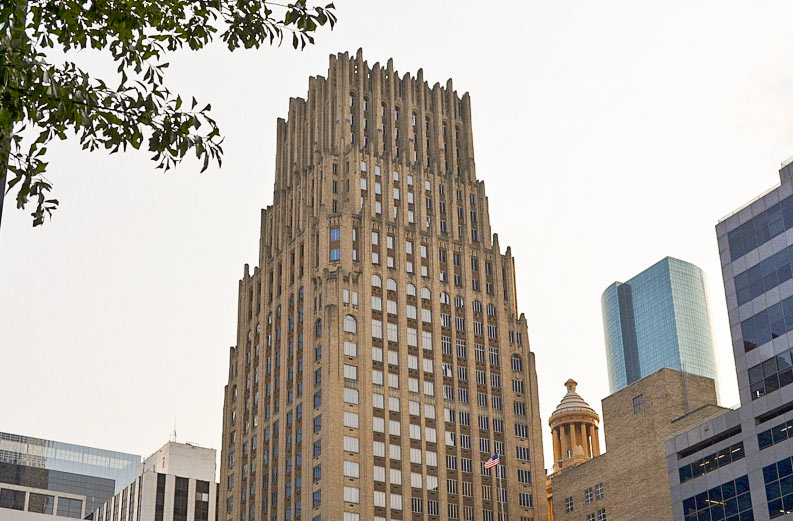 The next historic building is a can’t miss...literally. Once the tallest building in Houston, the Gulf Building [712 Main], now The Jones at The JPMorgan Chase Building, is a 37-story Art Deco skyscraper designed by architects Alfred C. Finn, Kenneth Franzheim and J.E.R. Carpenter. Over 90 years later the luxury of the building still remains. Today you’ll find it is a mixed-use space with a slew of retail including the ever-popular food hall, Finn Hall. 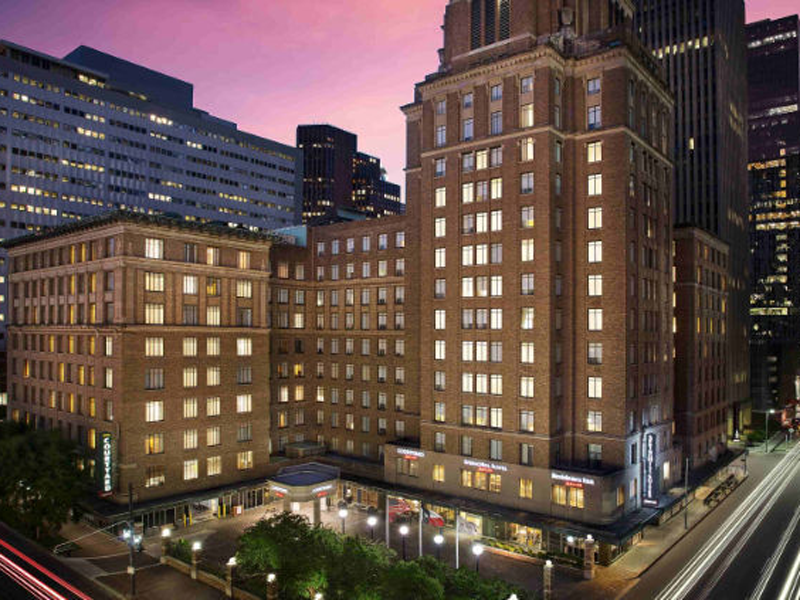 Our next stop is the historic office building at 1212 Main, the Humble Oil Building. Designed in the Italian Renaissance architecture style, the building was constructed by Humble Oil and Refining Company in 1921, with the tower section being added in 1936. Featuring approximately 196,000 square feet of space, the building was once the largest office building in the city. It was renovated in 2003 for use as a combination hotel and apartments, becoming a Springhill Suites in 2015. 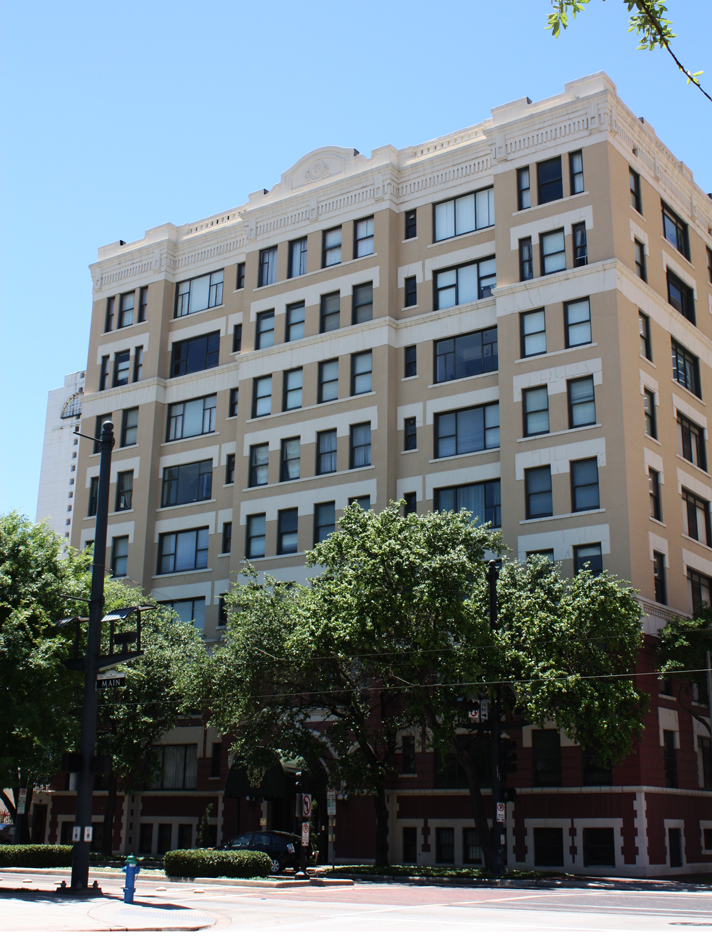 The final stop on our historic trip down Main Street is the Beaconsfield. Located at 1700 Main, the apartment building was designed by local architect Alonzo C. Pigg and completed in 1911. Originally, the Beaconsfield housed only sixteen apartments, each with two screened-in balconies and six large rooms that included fireplaces. The building was bought by Don and Peg Hartmann in the late 1970s and converted into condos.

Share your journey as you discover the treasures along Main Street by tagging us @DowntownHouston!