Small businesses are the heart & soul of #DowntownHouston. We encourage you to continue supporting local. Click here to see a list of restaurants ready to serve you. #houstonstrong
Print
Share
0
We’re So Excited, And We Just Can’t Hide It
Things To Look Forward To Downtown This Year And Beyond


Pandemic or not, time marches on, and so continues the steady heartbeat of progression in Downtown. With plenty of anticipation built over the last year, it’s time to (officially) get excited about these experiences, places and projects blossoming in 2021 and beyond.

Georgia James Tavern
The ground floor of Market Square Tower at 777 Preston will be ready for its close-up when Georgia James Tavern opens in the first half of 2021 with a “touch of Old Hollywood.” An offshoot of its namesake Georgia James—part of the Underbelly Hospitality universe that also includes One/Fifth, The Hay Merchant and UB Preserv—it will offer a casual experience with a menu suitable for daily dining, not just special occasion splurges.

Chef de cuisine and Underbelly alum Matthew Coburn will be running the Tavern’s kitchen, fresh off his previous post as chef de cuisine at Georgia James.

“We want to build a sense of community with this restaurant, strengthened by our relationships with local farmers and ranchers. The simple, technique-driven menu will reflect those relationships,” says Coburn in a recent press release. “My goal is for our guests to feel the culture we create from the moment they walk in the door.”

Visit for burgers, salads, sandwiches and heck yeah, some cast-iron seared meats. A wood-burning oven will bring its own brand of magic to certain dishes, including an apple crumble, which pays homage to the OG apple pie at Georgia James (also cooked in a wood-burning oven). Speaking of desserts, pastry chef Victoria Dearmond will include cheesecake on the list of comfort classics, with more to be determined.

The Nash
The spring offers arguably the best weather for patio hangs, and the dog-friendly option at new restaurant The Nash is a prime spot for dining, drinking and people watching—all from the historic building at 1111 Rusk.

On days when the sun is appreciated but the heat is not, grab a table inside to enjoy Chef Omar Pereney’s modern American menu with international influences, which include dishes like Korean bacon, Venezuelan cheese sticks called tequeños, French lentil soup, tuna crudo, cauliflower paneer curry and more.

And whether seated at a table or enjoying a seat at the well-appointed bar, take advantage of the happy hour menu Monday through Friday from 4-6 p.m. for discounted wines, draft beer and cocktails, plus a varied menu of alcohol-friendly plates like wild mushroom toast, fried paneer in a tomato gravy, and house-made tater tots. On Sundays, select wines are half-off by the bottle at the bar. 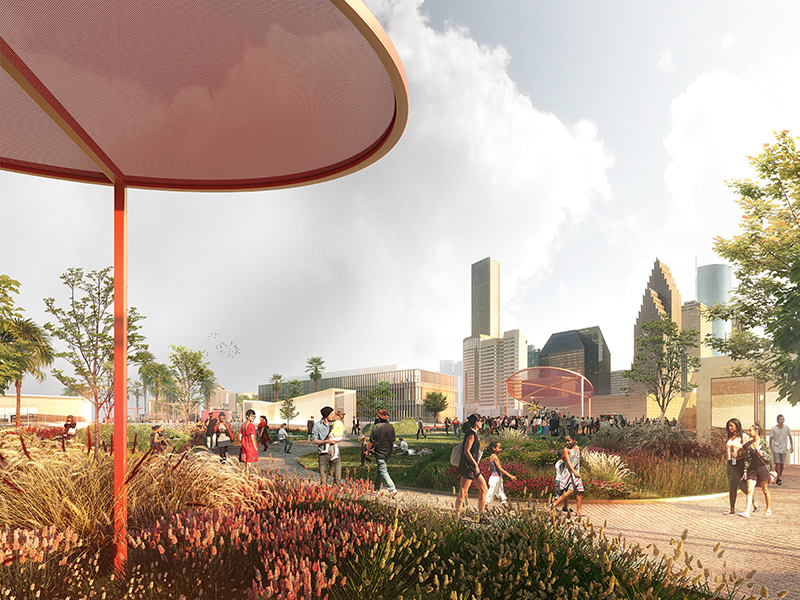 Post Houston
While the rest of the world seemed to hit the pause button for most of 2020, the construction of Post Houston pushed forward at 401 Franklin. What began as an idea became a vision, and ultimately a concrete plan to redevelop the former Barbara Jordan United States Post Office into an urban wonderland of mixed uses. Once slated for demolition, the 60s-era building will transform into an “apocalypse-chic” physical reality of 550,000 square feet when it opens to the public later this year.

Visitors can expect a 6,000-square-foot skylawn on the Post’s rooftop, designed by a Chicago-based landscape architect, Hoerr Schaudt, the same firm behind McGovern Centennial Park. The five-acre rooftop park and garden will host events for up to 300 guests.

Come for the rooftop, stay for the concert venue, co-working space, bars and restaurants. Of the latter, confirmed tenants include Austin-founded Salt & Time—a boutique butcher shop offering locally raised meats and other sundries—and their sibling spot, The Butcher’s Burger. Other Houston newcomers coming in hot (and cold) include Lea Jane’s Hot Chicken from Denver,  and Gelu Italian Ice from Grand Junction, CO. Rounding out the starting lineup are homegrown Taco Fuego with their famous Halal quesobirria tacos and SouPreme, offering beloved Vietnamese soups like pho and bun bo hue.

Discovery Green
Mural work from 14 artists will be unveiled in honor of Earth Day from noon to 5 p.m. on April 18 as part of Green Mountain Energy’s Earth Day celebration in partnership with the Citizens’ Environmental Coalition. Viewable through November, the artwork will live on four temporary structures along the White Promenade in Discovery Green.

“The deeply varied cultural landscape of Houston is fittingly matched by the rich ecosystem of our distinctive natural resources. Our delicate environment has never been more vulnerable; and each of us has a unique perspective in recognizing, embracing and taking action to secure a brighter future for all.” — Statement from Discovery Green representative about the project. 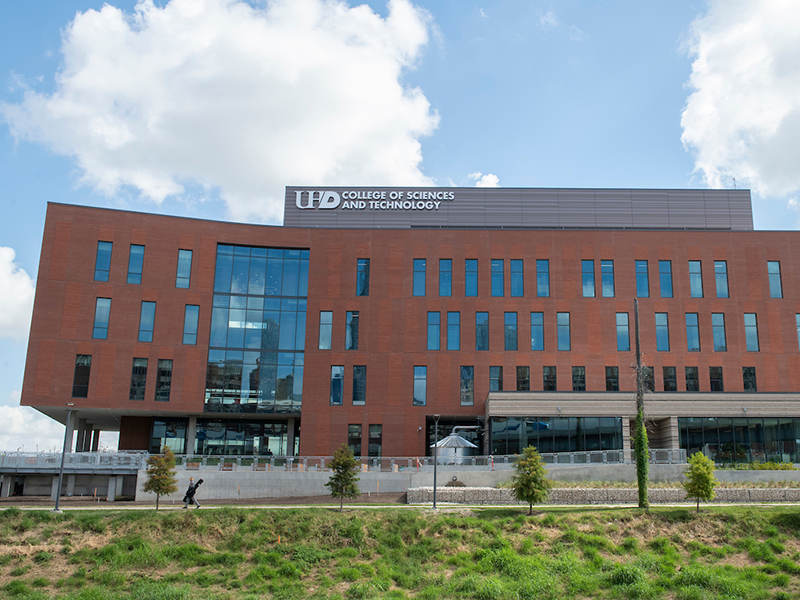 University of Houston-Downtown
There’s no resting on laurels for faculty, staff and students at UHD. The campus welcomes a new president — the institution’s seventh — Loren J. Blanchard on March 15. Blanchard’s experience comes from previous roles as provost and senior vice president of academic affairs at Xavier University in Louisiana, and most recently as executive vice chancellor for academic and student affairs at California State University.

In addition to fresh leadership moving in this spring, when classes resume in person, students can explore the brand new College of Sciences & Technology (CST) Building, which was awarded Leadership in Energy & Environmental Design (LEED) gold status earlier this year. The designation from the globally recognized U.S. Green Building Council is the second-ever LEED-certified facility in the UH system and the first with a gold rating.

Looking (further into the future) to: